Who's best and worst in the AFL at surge football in 2022?

There are always plenty of opinions on the keys to winning games of AFL football, but it is indisputable that momentum plays a huge role in the modern game.

For exhibit A, look no further than last year's grand final between Melbourne and the Western Bulldogs.

The decider at Perth Stadium was all swings and roundabouts — from the start of the second quarter the Bulldogs kicked three in five minutes, then Melbourne answered with a goal from Ben Brown, before the Bulldogs reeled off another five unanswered goals either side of the long break.

The grand final in the west looked like it was going to the sons of the west. The momentum seemed unshiftable — until Bailey Fritsch, Christian Petracca, Clayton Oliver, Ben Brown and their teammates turned the game on its head. 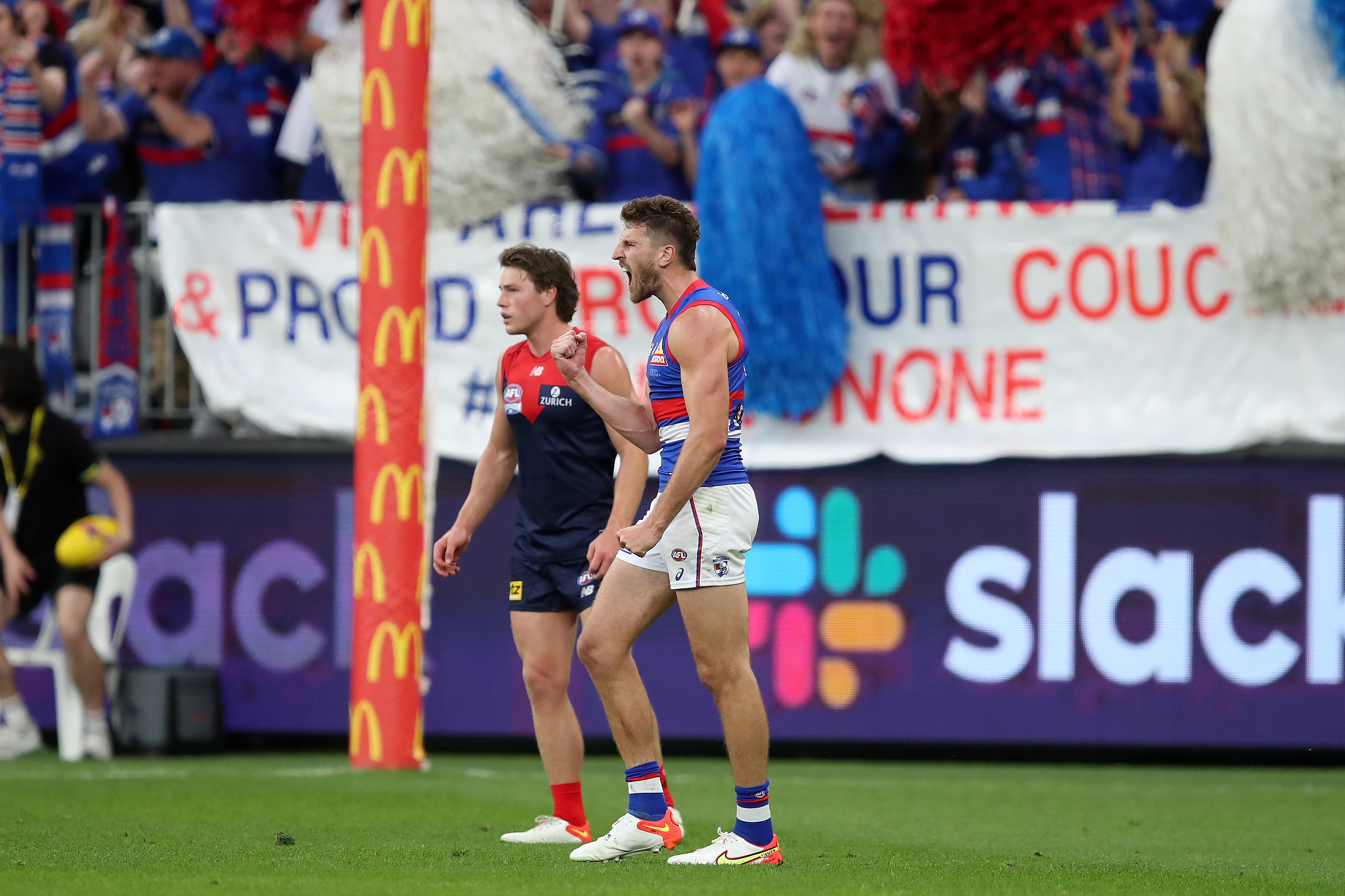 Marcus Bontempelli and the Bulldogs put a big surge on in last year's grand final, but the momentum swung away from them with the Demons' mighty third term.( Getty: Gary Day/AFL Photos )

Nine straight goals for the term, 15 of the last 16. It was a game-changer, a super surge.

Not every game since then has been as side-to-side as that — but the surge is a real phenomenon.

So who does it the best, who stops it best, and who has more work to do on both sides of the ball?

For our purposes a surge is three or more consecutive goals scored or conceded in a game.

Obviously the teams at the top of the ladder are there because they're doing something right, but it's not just a straight correlation of place on the ladder to ability (or inability) to produce or defend the surge.

The one clear stand-out is the defending premiers.

The Demons are undefeated after six rounds, so this might be expected, but the balance is the key. Melbourne is best in the league at producing surges.

If that wasn't enough, they have also allowed just four surges the other way — which explains why it's so hard to get ahead of Melbourne, and even harder to hunt them down when teams are trailing.

There isn't a huge gap to other top four sides, with the Swans (12) second behind Melbourne in overall surges scored, while Brisbane and St Kilda have 11.

Further down, Collingwood is on the edge of the top eight, but under new coach Craig McRae the Magpies are playing a dynamic brand of football. They are being helped by the likes of newcomers Nick Daicos and 10th gamer Jack Ginnivan — who already has 11 goals to his name — joining existing names like Jordan de Goey, Brody Mihocek, Jeremy Howe and Darcy Moore.

The Pies have also put on 11 surges in their six games, third highest in the league — and they also have conceded only six.

There have been eight examples of teams producing bursts of eight or more goals in a row during games so far this season, including teams who are in the bottom half of the ladder like Port Adelaide (11 goals) and Western Bulldogs (eight goals).

But it's not just a case of teams blitzing it for a solid quarter or a half — there are also the shorter, repeated bursts that wear down an opposition. 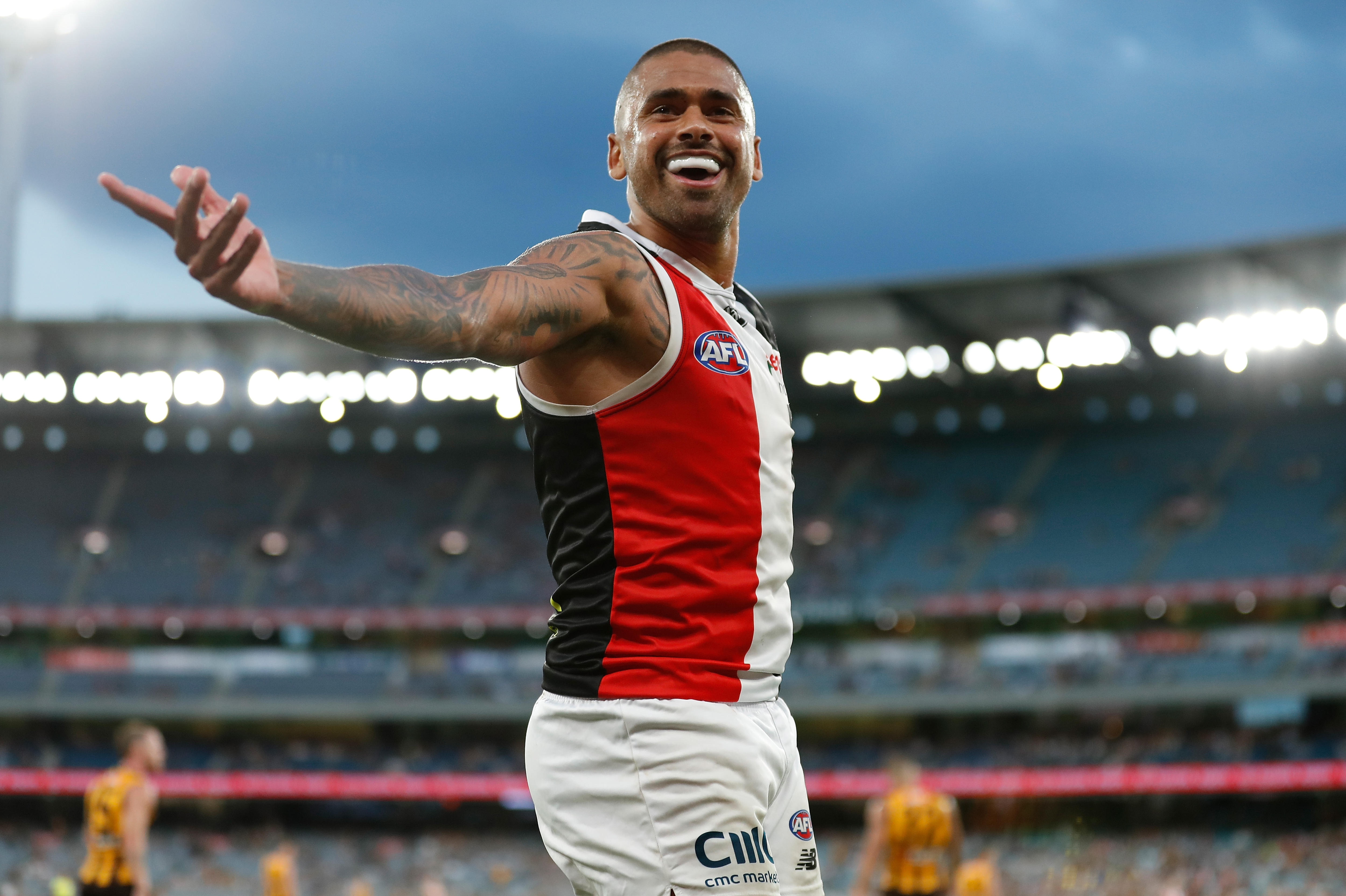 The biggest example of this came in round four, when St Kilda took Hawthorn to the cleaners to the tune of 69 points.

The Hawks actually led at the MCG with Dylan Moore booting the first two goals of the game. But the Saints got on top, and produced six surges during the game, with runs of 3, 3,  4, 3, 5 and 3 goals to overwhelm Hawthorn in the end.

The stats show that plenty of teams are capable of producing bursts of good football.

The question is how often they can produce it, how damaging they are when they have the momentum, and whether they have the ability to stop opponents from rolling on when the situation is reversed.

There's a fairly easy explanation for the Demons' position. Even when they are not playing their best, they have a group of players who are able to lift at appropriate moments to stifle oppositions, or sense their opportunity and break the game open with multiple goals in a row. 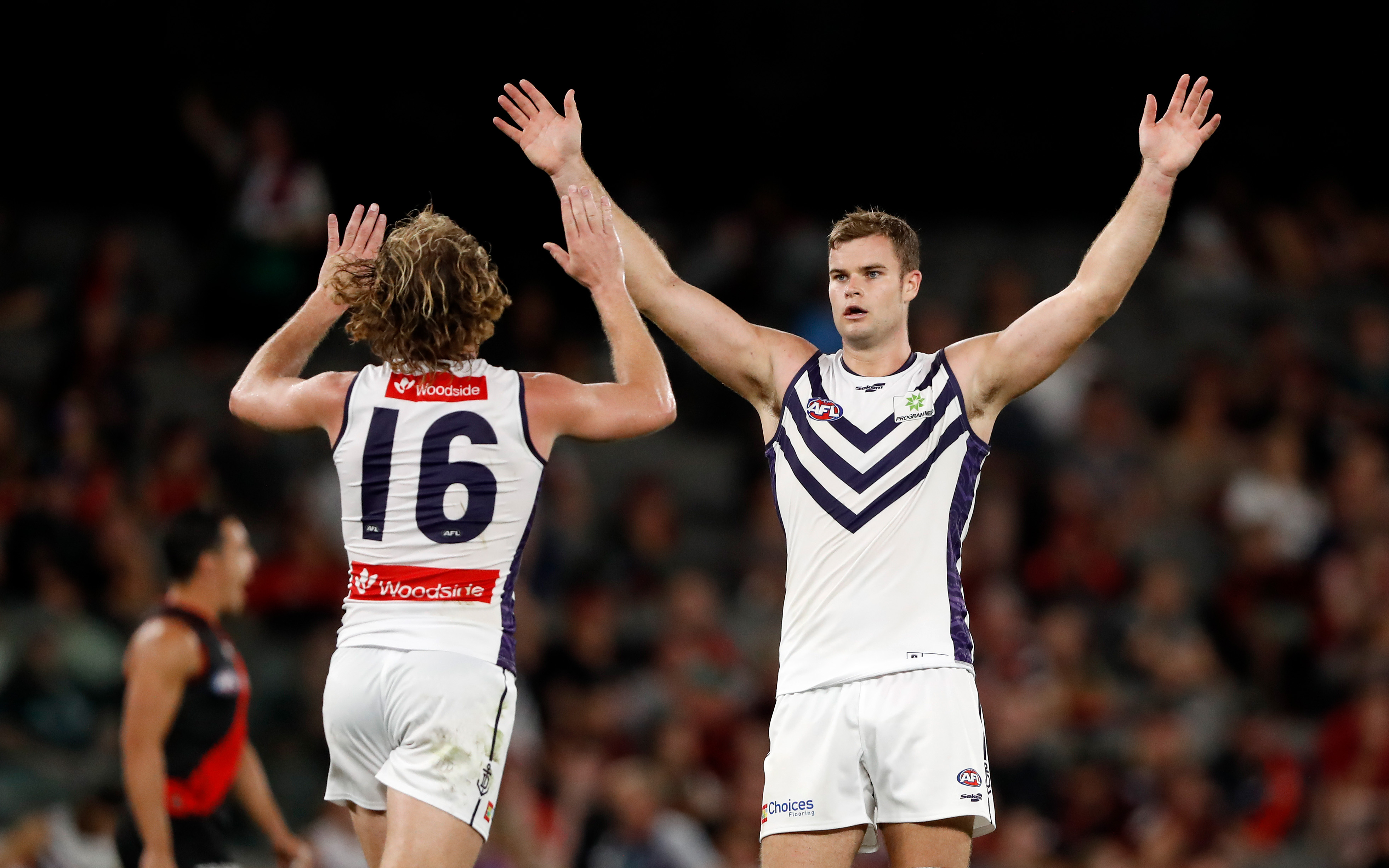 Big man Sean Darcy was one of many to get on the board as the Dockers banged on 10 goals without reply against Essendon in round 5.( Getty Images: Dylan Burns )

Just below them on the ladder, the Dockers have a more attacking style in 2022, and they are proving hard to stop for other sides.

The accurate disposal of Andrew Brayshaw is helping Fremantle pick better options in attack, the presence of contested ball-getters like Will Brodie are making life tougher for oppositions to get the ball out of the middle.

The ability of ruck Sean Darcy to move forward and either mark and goal or bring the ball to ground is aiding Freo.

Add to that a solid back six with intercept markers like Brennan Cox, and you have a reason why the Dockers have only conceded five surges this season. And while they trail the Demons with nine scoring surges, their best is dominating — they ran over Essendon with 10 goals in a row in round five.

The Suns are a club that shows why although surge numbers are important it's not the whole story. Gold Coast have nine scoring surges in six rounds, and they have conceded just seven — they did arguably the best job so far of stopping the Demons juggernaut in round two, keeping them to one surge of four goals.

This all suggests they should be trending upwards. Two key issues for the 13th-place Suns are the absence of a true spearhead in the injured Ben King, and the overall inability to convert opportunities going inside 50.

The Suns have the third-most forward entries in the league — if Stuart Dew's men can find targets a bit better their ability to hurt teams more on the scoreboard is likely to surge with it.

The team at the bottom of the ladder, North Melbourne, is in rebuild mode for coach David Noble. The Kangaroos have had a number of heavy losses this year, so it's no surprise that they have conceded 14 surges in six games so far.

However, they have produced seven surges of their own, and have had at least one run of three or more goals in each round this year.

At the bottom of the surge ladder are two teams — in attack, the team that finds it hardest to put runs of goals together is GWS. The Giants have only four so far in 2022, and in three of their first five games they failed to put a single burst of three goals together.

Their latest loss to St Kilda — with Toby Greene back in the side — at least saw the Giants show some spark with a run of four goals in a row in the first half.

On the defensive side, the team that trails the league is Essendon.

Ben Rutten's men are 1-5 after their Anzac Day loss to Collingwood — the Bombers conceded two surges of three goals each at the MCG, but tough outings against the Demons (four surges) and the Cats in the opening round (five surges) mean they have had a total of 15 surges scored on them so far.

This has been a contributor to the team's average of 105.5 points conceded a game.