Richmond players revealed they had no idea when Dustin Martin would be coming back from indefinite leave, while Tigers coach Damien Hardwick joked the superstar failed to bring him a coffee upon returning to Punt Road.

Martin took time away from footy after the loss to Carlton in Round 1 as he struggled to cope with the death of his late father back in December.

Speculations the three-time Norm Smith medallist could walk away from the game for good were quashed when he returned to training in April. 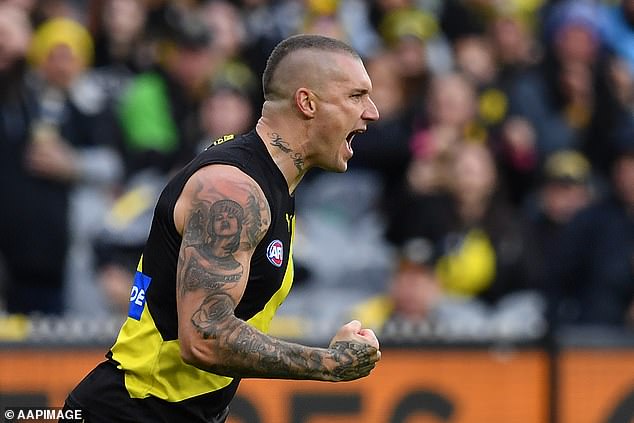 The sight of Martin back in the gym at Punt Road was a major boost for his teammates, who had no indication as to when he may be back.

'We didn’t really know when he was coming back, we’re just glad he is and more importantly he’s in a good spot,' Tigers half-forward Jack Graham told the Herald Sun.

'I walked into the club and saw him doing weights, which was a bit strange because he doesn’t do weights.'

Graham, however, admitted discussions over the reasons that led Martin to take a six-week break from the AFL remained limited. 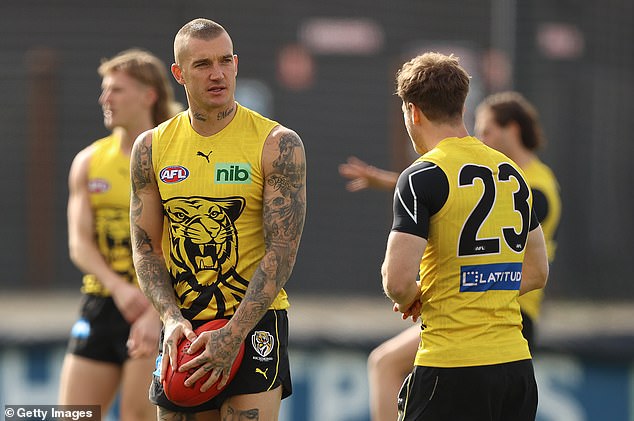 Martin returned to training at Punt Road on April 23, but missed the game against West Coast

'You don’t really bring it up too much, obviously he’s going through a tough time,' he added.

'We just wanted to support him and to know that he’s got 44 mates that all care for him and are here for him.'

Throughout the star midfielder's absence, Hardwick maintained Richmond would stand by him and give him all the time he needed to recover. When Martin did eventually the return, his first conversation with the Tigers coach wasn't about football.

'Where’s my coffee?,' Hardwick joked when asked what he first spoke to the 30-year-old about. 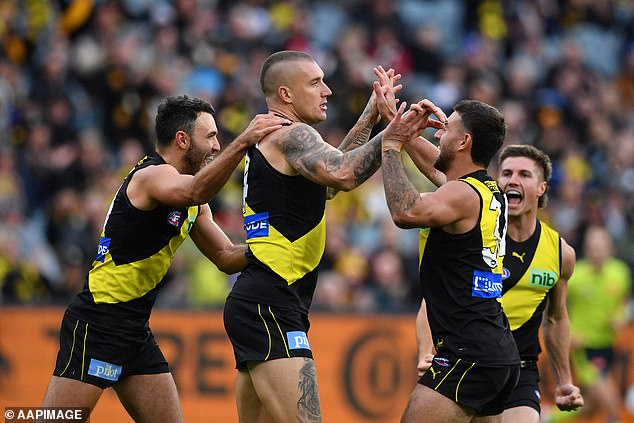 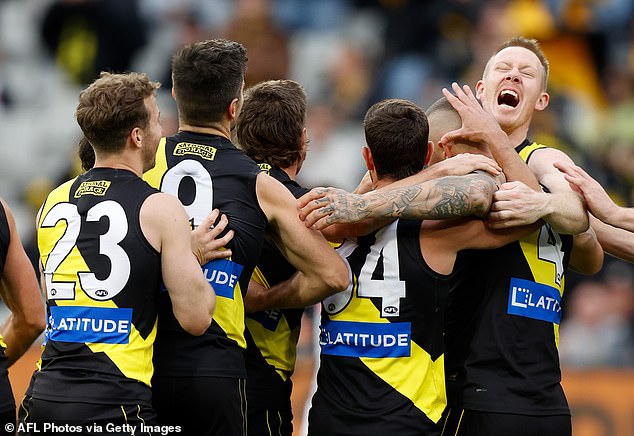 'He was in early [doing a rehab session], so he should’ve bought me one.'

After not traveling to Perth for Richmond's 109-point demolition of West Coast in Round 7, Martin made his return in the Tigers' 113-86 win over Collingwood in a blockbuster clash at the MCG on Saturday.

He honoured the memory of his late father by wearing a stirring tribute to him, sporting boots bearing the message 'Live Free, Die Free, SM' 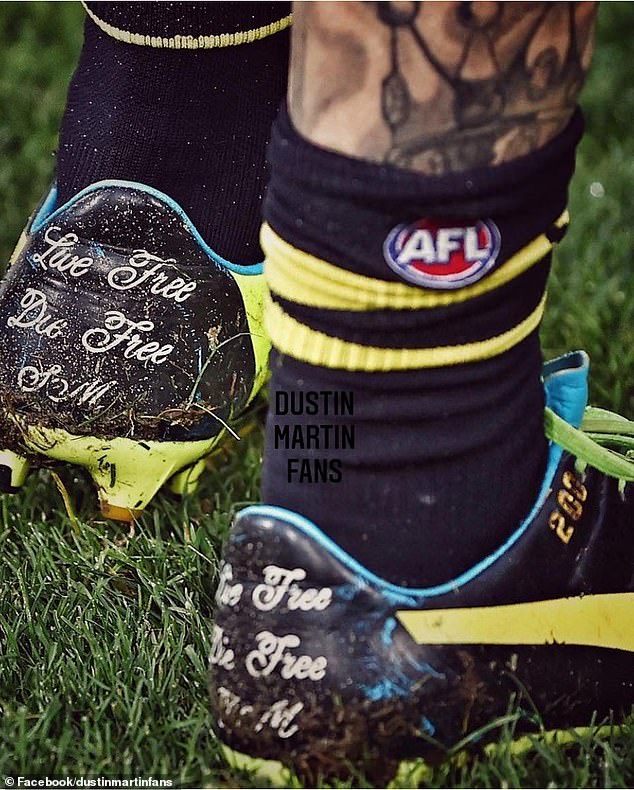 Martin wore the message 'Live Free, Die Free, SM' on the back of his boots as he played a starring role in his comeback game after six weeks off to grieve for his father Shane

While looking somewhat rusty at first in what was only his second game in almost a year - Martin's season ended in Round 18 last year after he suffered a lacerated kidney - there were signs of the superstar Richmond have sorely missed.

Hardwick warned during the lead-up to the Collingwood clash that the three-time premiership winner would likely only be at 50 per cent of his brilliant best, but he was heavily involved in the match.

Martin first got involved in the opening seconds with a tackle but it took 10 minutes for him to get his first touch, when he shanked a left-footed kick into the head of Collingwood's John Noble. 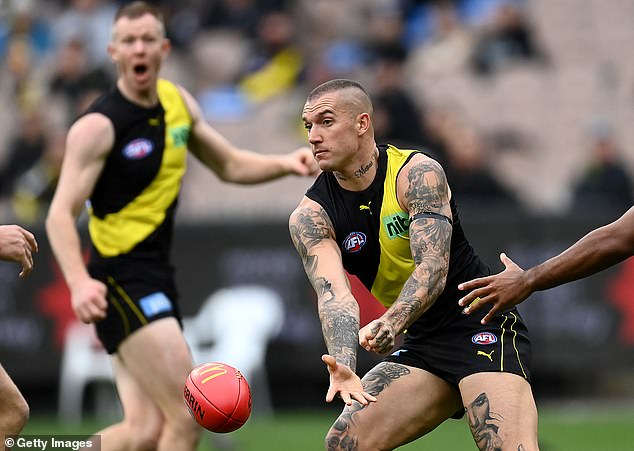 His second kick was better, as he latched onto the loose football and found Tigers forward Tom Lynch, who connected with Jason Castagna for the Tigers' second goal.

Moments later Martin pulled out his huge 'don't argue' fend on Nick Daicos and the star was well and truly in the match.

Martin eventually collected 23 disposals and kicked two goals, the first of which sparked emotional celebrations on and off the field when it came three minutes into the third quarter 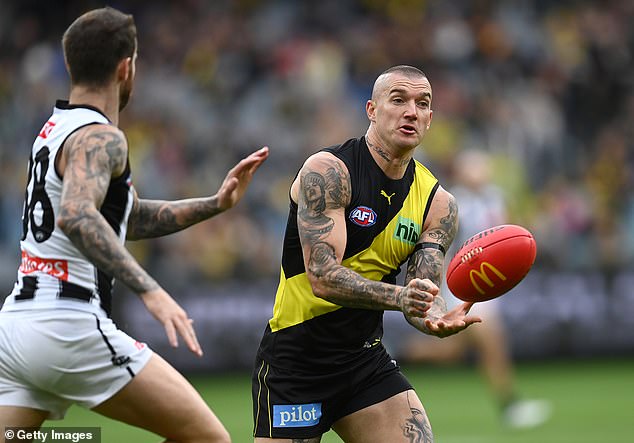 'It was a pretty touching moment when he kicked that goal and the whole side got to him,' Hardwick said.

'I’d say there was a few misty eyes in the coaches’ box and down below as well.

'It was a nice moment to get some reward for his hard work that he’s put in on himself.'