Unless you are in charge of a team skating to victory in a grand final, things are never easy for AFL coaches.

Injuries, COVID-19 and streamlined, or underfunded, football departments all contribute to the stress of the job, not to mention the constant scrutiny from media, fan forums and the like.

When we look at which coaches are on the hot seat after the first four rounds of the season, various factors come into play.

Those coaches feeling the most perceived pressure are not necessarily just those at clubs at the foot of the ladder — for example, Adam Simpson at West Coast and David Noble at North Melbourne do not make this list. They may make yours.

Let's have a look.

Ken Hinkley has been at Alberton for nine years, going on 10 — in that time there has been no flag and no grand final for the Power, despite five finals runs, and three preliminary finals appearances.

The quandary that Hinkley and his team face is that they cannot avoid thinking about finals, since the Power's premiership window is supposed to be now.

At the minute, however, Port Adelaide do not look near finals material on the evidence of the first month of the season. A damaging loss to the Crows in the first Friday night prime time showdown did Hinkley no favours, particularly with the Power letting a four-goal lead slip.

The Power went out with a new plan of keeping the ball off the Demons, and they managed it for a quarter and a half — at the cost of not scoring themselves — before Melbourne saw an opening and drove straight through it.

Meanwhile, the absence of bookends Charlie Dixon and Aliir Aliir is clearly a factor in Port Adelaide's struggles.

Regardless, the Power have to deal with what they have, and this Sunday they will face a fired-up Carlton who are still smarting from a shock loss to Gold Coast at Carrara.

A victory would change things, at least temporarily. But they need more wins on the board, and quickly, to arrest this slide.

A loss to the Blues on Thursday would leave the Power at 0-5. If that happens it will not only make it almost certain that Port Adelaide will not make finals, but it will surely bring closer the day that the club's executive loses patience in Hinkley as the man to take this team forward. 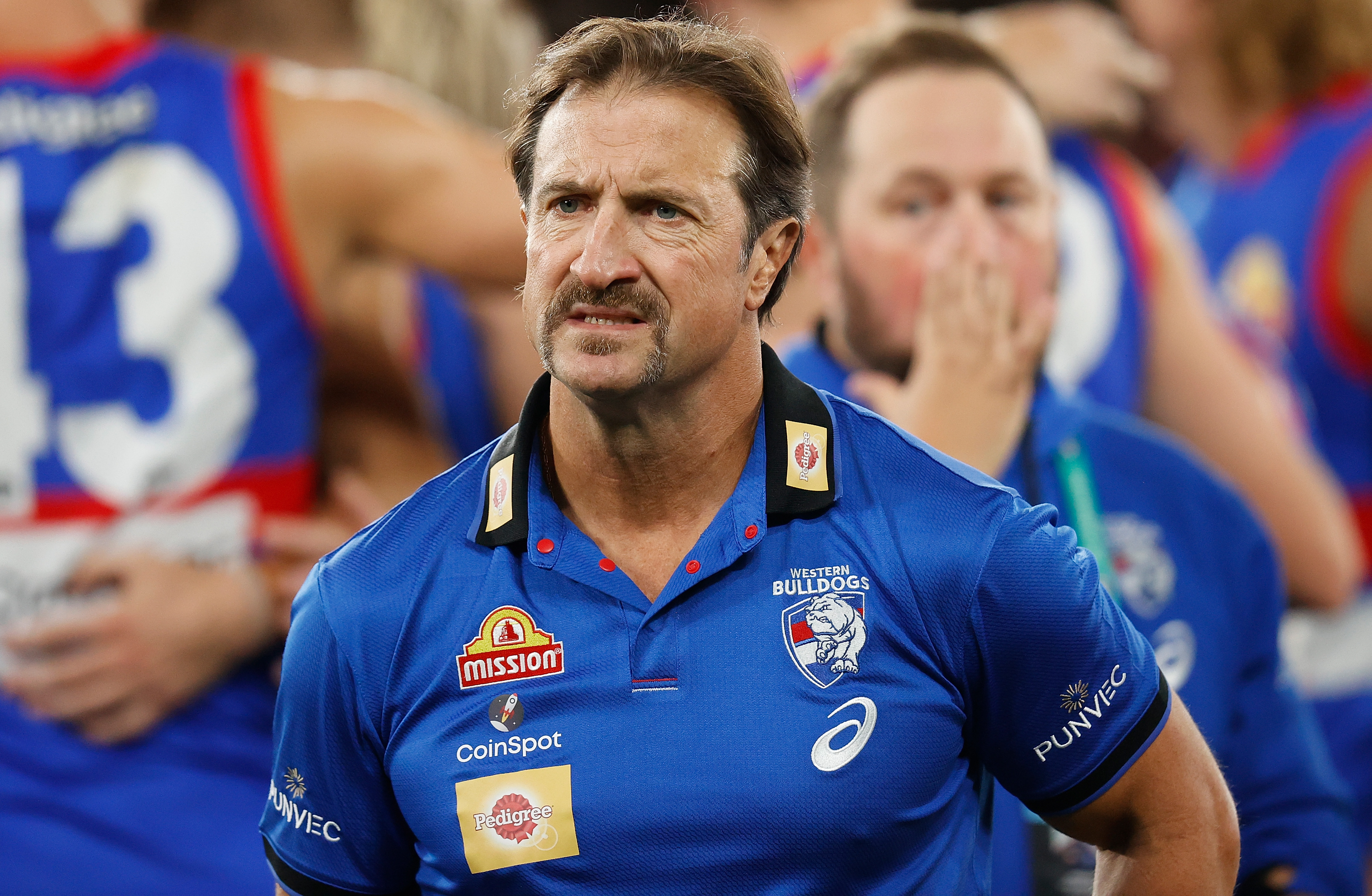 Five games ago, Luke Beveridge and his Western Bulldogs were playing off in a grand final, but it's been a much tougher start to 2022.( AFL Photos via Getty Images: Michael Willson )

It's been a bit of a rollercoaster for the Bulldogs and their coach, Luke Beveridge, since last September's grand final.

From a position of being in the lead, with all the momentum — less than one half of football away from a second flag in six years — to being blown away at Perth Stadium.

Round one and the grand final rematch was like deja vu: Periods of dominance, followed by an inability to stop the Demons when they grabbed back the momentum.

Another loss to Carlton was followed by drama off the field involving Beveridge's reaction to questioning at a post-match press conference, leading to a public apology from the Bulldogs coach.

His team then rebounded with a vital win over the Sydney Swans, and things looked back on an upward trend. But Saturday night's loss to the Tigers had alarm bells ringing.

An under-strength Richmond outfit still managed to beat the Bulldogs by nearly 40 points, while Beveridge's men kicked themselves out of the game with a return of 7.19 (61).

In the past fortnight, against the Swans and Tigers, they have scored a total of 16.36 — and ,if you add in the final quarter of the loss against Carlton, it's 18.43.

A look at the list shows a team that was good enough to get to a grand final, and remains clearly filled with talent.

They generated more possessions, clearances, and inside 50s than the Tigers, but they couldn't get the job done.

The next three rounds provide an opportunity — on paper at least — for Beveridge's side to settle into some form and get some wins on the board, with North Melbourne, Adelaide and Essendon on the menu.

However, if they continue their wayward ways in front of goal and lose a couple of those winnable matches, then they are looking at a possible 2-5 start and, if we get close to that point, the pressure levels on the Bulldogs' coaching staff will become severe.

It was a bittersweet moment for the Bombers on Sunday afternoon, when they held off a persistent Crows outfit to earn their first win of the season at Docklands, but the coach, Ben Rutten wasn't there to see it. 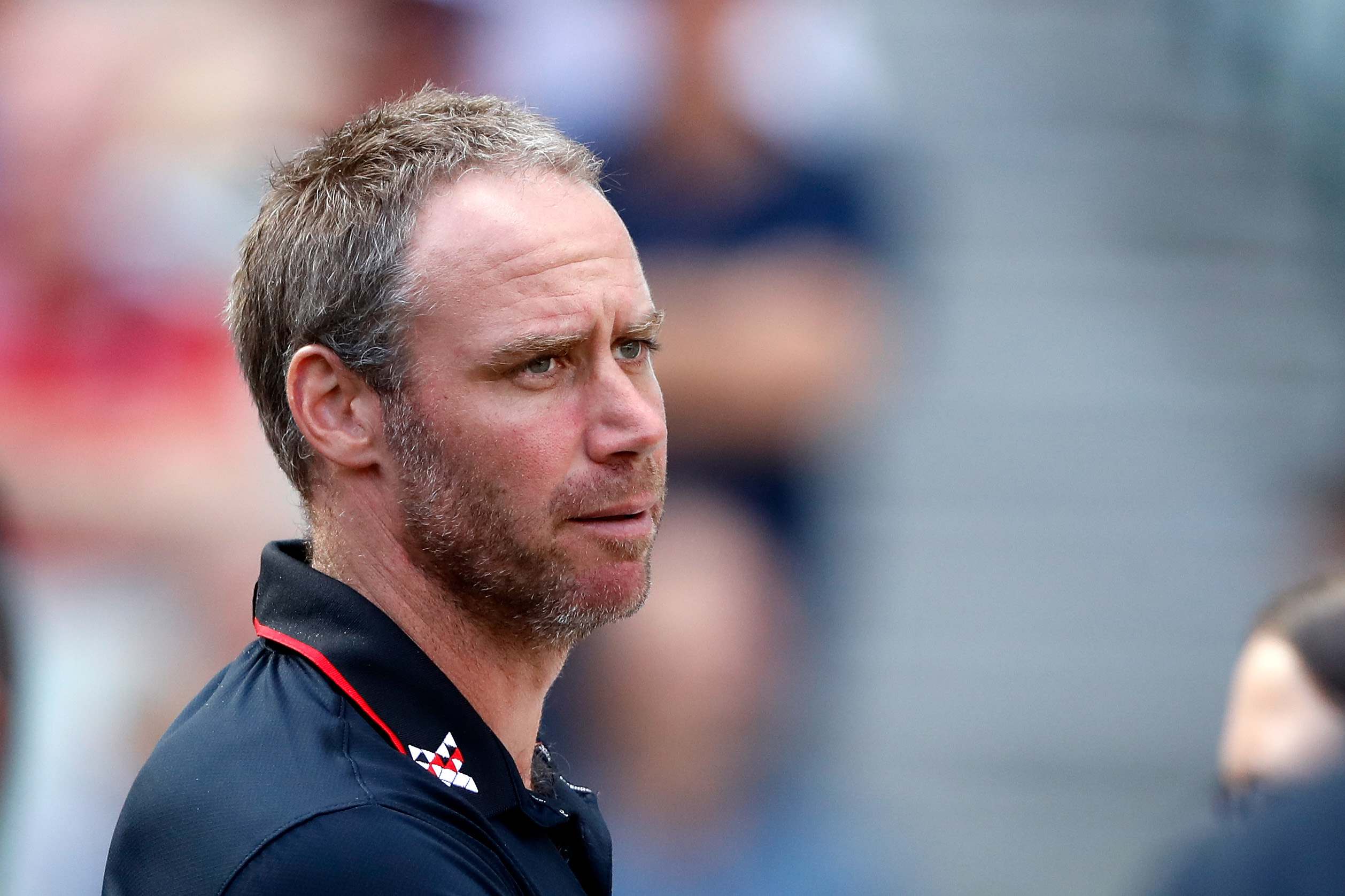 The Bombers have got their first win on the board, for 2022, but there is still a long road ahead for the team and coach Ben Rutten.( AFL Photos via Getty Images: Dylan Burns )

Assistant coach Blake Caracella got to lead the team at Docklands, while Rutten was isolating as a household contact of a positive COVID-19 case.

The win was a boost for the previously winless Bombers, which would tend to suggest Rutten would be moving away from the heat of the hot seat.

However, it's not always just about the wins and losses — unless they tell a particularly horrible story — but the expectations game plays a huge part as well.

Just as Hinkley and Beveridge are dealing with heightened expectations — leading teams coming off prelim and grand final appearances — with Essendon it's all about finals.

The Bombers made the succession plan to move out John Worsfold and bring Rutten in after three years as an assistant.

That move worked, with Essendon making finals in 2021, before losing an elimination final to the Bulldogs.

In that context, round one's bad loss to Geelong was an even bigger blow than normal.

The Bombers pushed Brisbane in round two in a better performance, and then made the Demons work hard for their win.

So the Adelaide game was seen as a must-win game — and they won — but their next three against Fremantle, Collingwood and the Bulldogs are not straightforward.

Once again, it is about expectations.

As it stands, the team is near the foot of the ladder, albeit having played a tough series of games.

If Essendon well and truly loses touch with the top eight, however, then the temperature is likely to go a lot hotter still for Rutten and the Bombers. 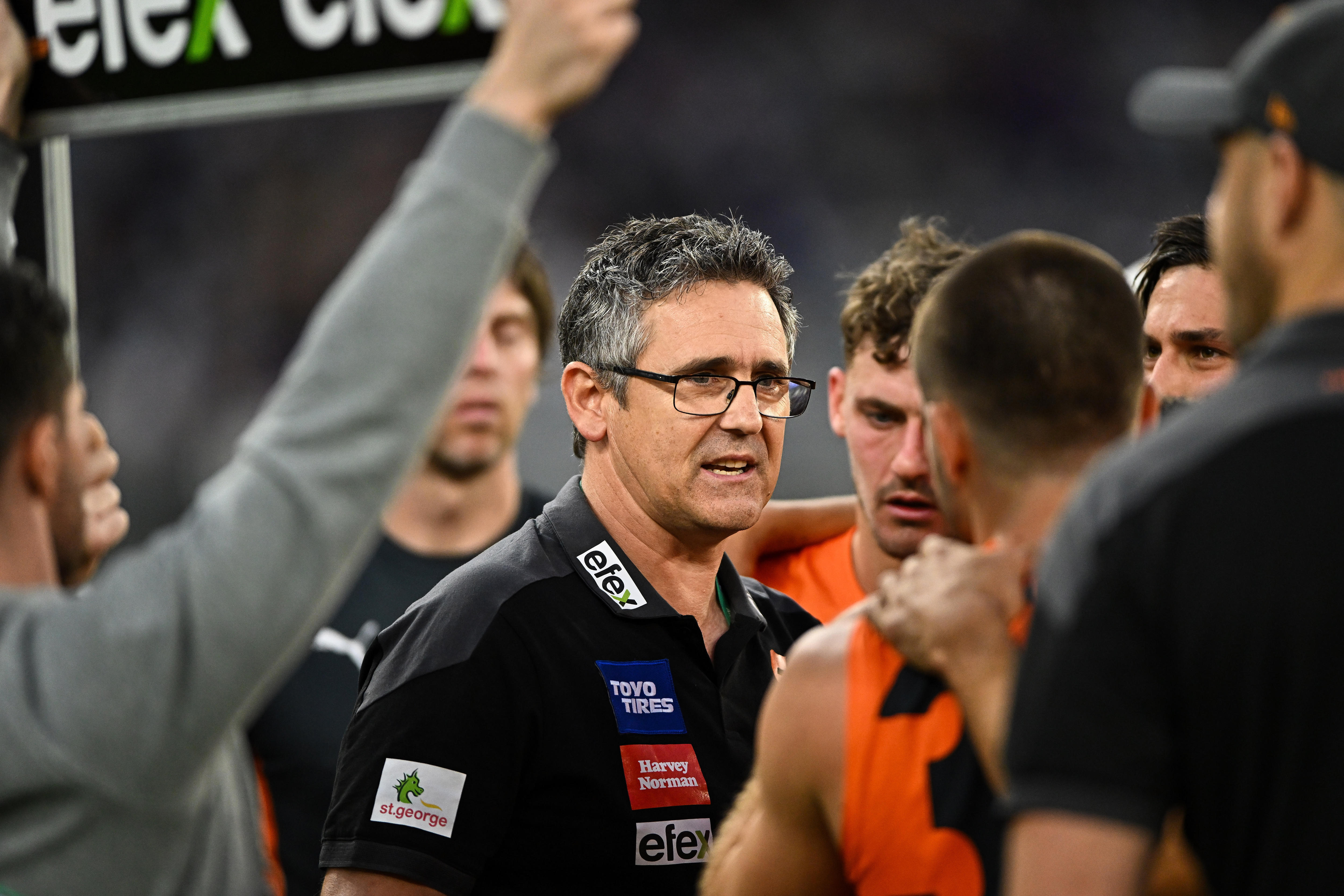 Leon Cameron says he is happy to leave the question of his contract with GWS until the end of the season, but there are big challenges ahead for him and the Giants.( AFL Photos via Getty Images: Daniel Carson )

A month into the season, things are not going smoothly for GWS nor for their coach Leon Cameron.

Aside from a round-three win over Gold Coast — which looks better in the wake of last weekend's win by the Suns over Carlton — it has been a tough start for the Giants.

There are obviously some positives, with the emergence of Tom Green as a genuine star, some improved performances from Stephen Coniglio after a tough 2021, the forward play of Harry Himmelberg, and the fact they will regain prime mover Toby Greene next week after his suspension ends.

But there are some familiar concerns at the Giants, one of which is scoring. The top eight sides in the AFL after round four are scoring an average of 92.4 points a game. The Giants are averaging 75.5.

Now the Giants are 1-3, and they have two very tough assignments in the next fortnight.

The Demons at the MCG would be a challenge for anyone in the league, and then there is a Friday night contest in Canberra against a Saints, a team that may be on the verge of being a real contender for this year's flag.

Those two games loom as pivotal for GWS' season but, after that, they will have to face Geelong in round eight and Carlton in round nine. It's not inconceivable that the Giants could be 2-7 after those games.

Leon Cameron is in his ninth season at the Giants, and the second of a two-year extension signed in 2020.

Cameron has said publicly that he and the club have agreed to park the question of a new contract until season's end.

If they can't find a way to get some more results go their way in the next five weeks, that question could be already moot before the team even hits its bye.