The final tickets to the first-ever Perth AFL grand final sold out within minutes this morning, as the venue put out an urgent call for extra workers to cope with the capacity crowd.

At one point more than 180,000 people were in the digital queue to get one of the last remaining tickets at the match, after the AFL made the final 10,250 of Perth Stadium's 60,000 seats available to the general public.

They sold out in nine minutes of going online at 10am.

Ticketmaster Australia said it was the busiest it sale queue in its history, five times bigger than last year's grand final.

Perth Stadium this morning also sent out an urgent call for 600 extra staff, less than 10 days before the highly anticipated clash between the Western Bulldogs and the Melbourne Demons on September 25.

The call-out follows a problem-plagued semi-final earlier this month which saw crowds queue for up to 40 minutes for food and drink at the clash between Geelong and Greater Western Sydney.

"This (more staff) is reflective of the nature of the event – gates will be open longer and there will be more pre-and post-match entertainment and activations to be involved in," stadium chief executive chief executive Mike McKenna said.

Mr McKenna said the stadium needed about 2,500 staff for the grand final and had about 1,800 locked in, with another 500 applications "in process".

He said they were now mainly looking for people to serve and work in function rooms and cook food.

He conceded the semi-final was a "low point" for service at the stadium, and they would be aiming to keep queues below six minutes.

This is the first time Perth has ever hosted an AFL grand final, and only the second time it has ever been held outside of Melbourne, after last year's decider was played in Brisbane due to the COVID pandemic.

Perth Stadium procurement and logistics manager Garth Wilson told ABC Perth he had 1,100 kegs of beer coming in along with 5.5 tonnes of chips, 5,000 burger patties, 4,000 hotdogs and 2,500 pizzas.

He expected the grand final to see the biggest volume of beer consumed yet.

Patrons at the last western derby — with the Eagles playing the Dockers — went through 480 kegs of beer, and the preliminary finals chewed through 830 kegs.

'Relief' to get season to this point

AFL chief executive Gillon McLachlan said it was a relief to get the season to this point.

"It's been a year of resilience and finding a way with huge support from our members and supporters and fans," he said.

He said he hoped there were events all over Perth in the lead-up to next weekend's grand final. 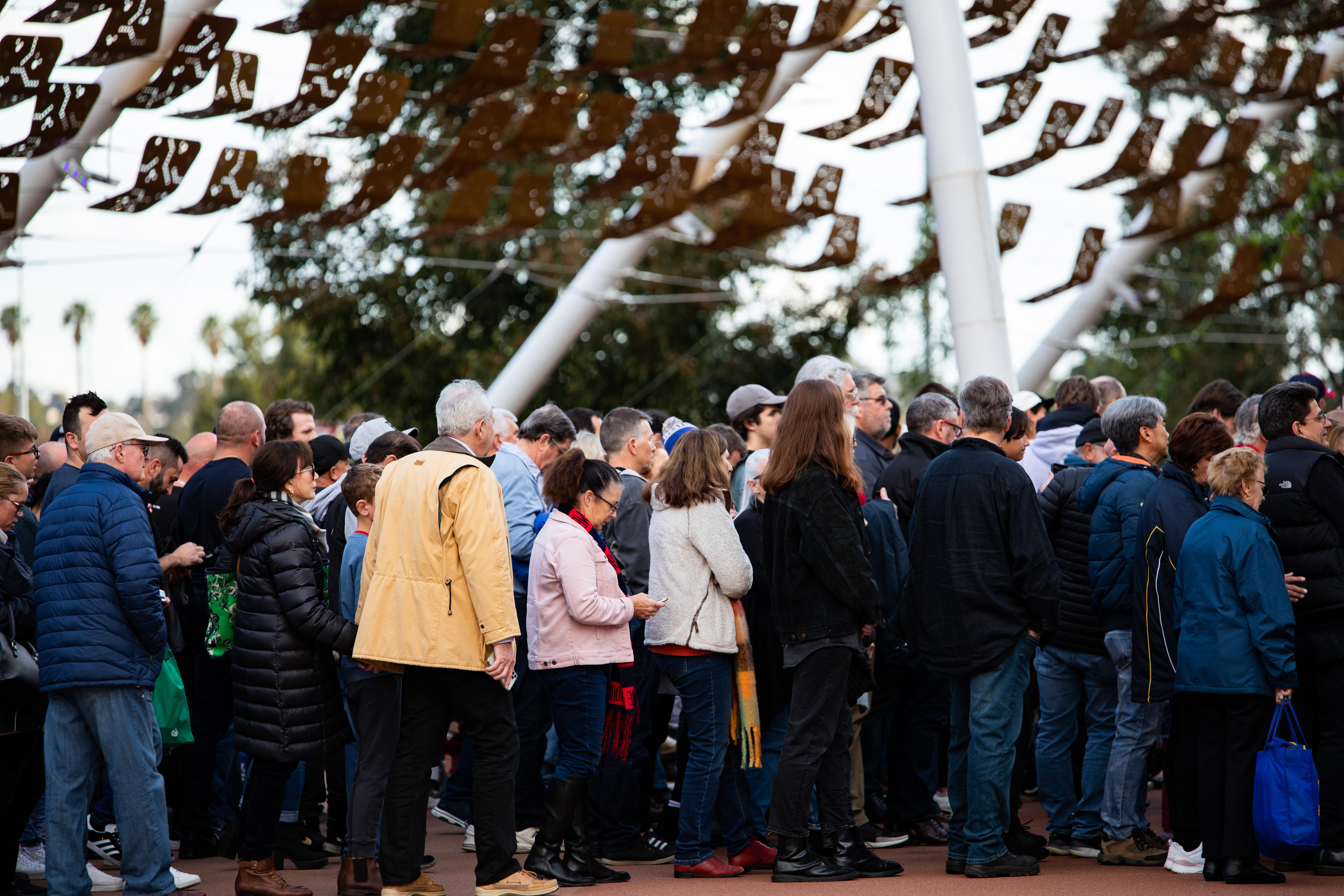 There have been complaints about wait times at the stadium during big matches.(

Because of the late decision to move the season decider to WA, it was not possible to hold the traditional grand final parade.

But he said plenty of fans would still be able to see both sides train before the main event.

He also threw his support behind other events behind held in the lead-up, including the prospect of an alternative parade through the city.

"It's been 150 years in the making to get the grand final here, and I reckon take the week off, have lunches, go your hardest."

He said he was not even contemplating a COVID outbreak before the final.

"If something happened, you know that we've been dealing with this for two years and we would be able to find a way of dealing with it, and that's all I'll say, other than I just can't wait for this grand final.

"The tickets are sold, it'll be amazing, and everyone's going to do their jobs, and if for some reason things change we'd deal with it, absolutely."

The Western Bulldogs are confident defenders Alex Keath and Laitham Vandemeer will play in the grand final next week, after both struggled with hamstring issues this week.

Keath missed the Bulldogs 71-point preliminary final win over Port Adelaide with a tight hamstring, while Vandemeer was subbed out of that game.

Bulldogs coach Luke Beveridge said a conservative approach was taken with Vandemeer, who has a history of hamstring problems.

“Laitham came off with some hamstring concerns, and we believe, after full assessment, that he caught a knock in his glute and he’s had some referred pain,” he said.

“You can imagine if you've had some history there, then the alarm bells start to ring.

“So he, he put his hand up, he wanted to come off and make sure everything's alright.

“The signs look good for Laith.” The Bulldogs are confident Cody Weightman will be beack from injury for the grand final.(

Keath will need to prove his fitness, but the club is optimistic he will play, while forward Cody Weightman will return from concussion.

The decider will be the Bulldogs' second in five years, after a fairytale win in 2016.

Beveridge said that experience would be helpful for the club in managing the buildup.

“Definitely our executive Kylie's (President Kylie Watson-Wheeler) been there before, and this time as president, which is fantastic for her, and so that's an important thing,” he said.

“I think it counts. It might be just that small marginal gain that might make a little bit of a difference.”

Source: https://www.abc.net.au/news/2021-09-16/afl-grand-final-tickets-for-perth-stadium-clash-sell-out/100462850
We gotta use cookies to ensure that we give you the best WA footy experience. Just go with it (we won't do anything with data). Ok