There is no questioning Billy Brownless' passion for his beloved Geelong Cats.

And 7 News Perth reporter and producer Kate Massey captured that passion in the moment in the club's tense AFL win over the Western Bulldogs on Friday night.

With the game on the line, the fan captured this fantastic vision of the ball sailing through the goals just before Brownless leaned out from his corporate suite to celebrate wildly.

The Cats legend was at the game with his brother Blair, a teacher and part-time sports commentator, who lives in Tasmania but regularly travels to Melbourne to watch footy with his brother.

The siblings were enjoying the corporate hospitality and the atmosphere of a close win alongside another friend and Geelong supporter. 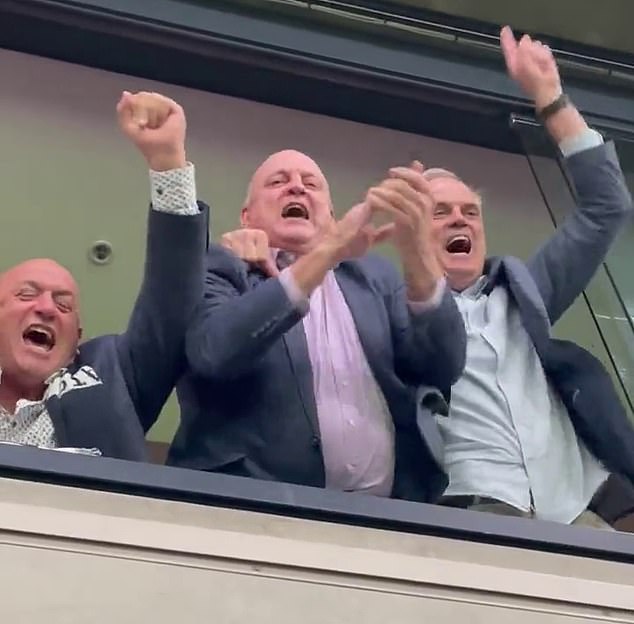 Billy Brownless (centre), his brother (right) and an unidentified mate celebrate a Geelong goal in their round 12 AFL clash against the Western Bulldogs

It is not the first time the Brownless brothers have been captured showing their passion for Geelong.

Last season they were spotted giving cheeky barbs to Hawthorn president Jeff Kennett in the dying seconds of the Cats' narrow win over the Hawks.

Blair helpfully held up his fingers to indicate to Kennett that there were only five seconds left in the match and his side was behind on the scoreboard.

Billy found the whole situation hilarious and chimed in with some choice words of his own, while Kennett held his composure as he turned away from the siblings.

It didn't end there, Billy then took to Instagram to have another crack at the Hawks boss.

He was named an All-Australian in 1991 and played five representative matches, three for New South Wales and one game each for NSW/ACT and the Allies side in 1995.