AFL Round-Up: Was that the weirdest week in footy history?

Buddy Franklin alone made sure we will never forget round two of the 2022 AFL season.

But the madness didn't end there. And, while the weirdness unfolded, some teams staked their claims and others raised serious alarms.

A truly unique round of footy

It's safe to say we have never seen an AFL round filled with so many things that have never happened before, may never happen again or have only previously happened in eras consigned to memory.

Friday night was remarkable. The slow build to Buddy's crescendo could hardly have worked out better, but everything that went down after the moment the ball left Franklin's boot was completely bizarre. 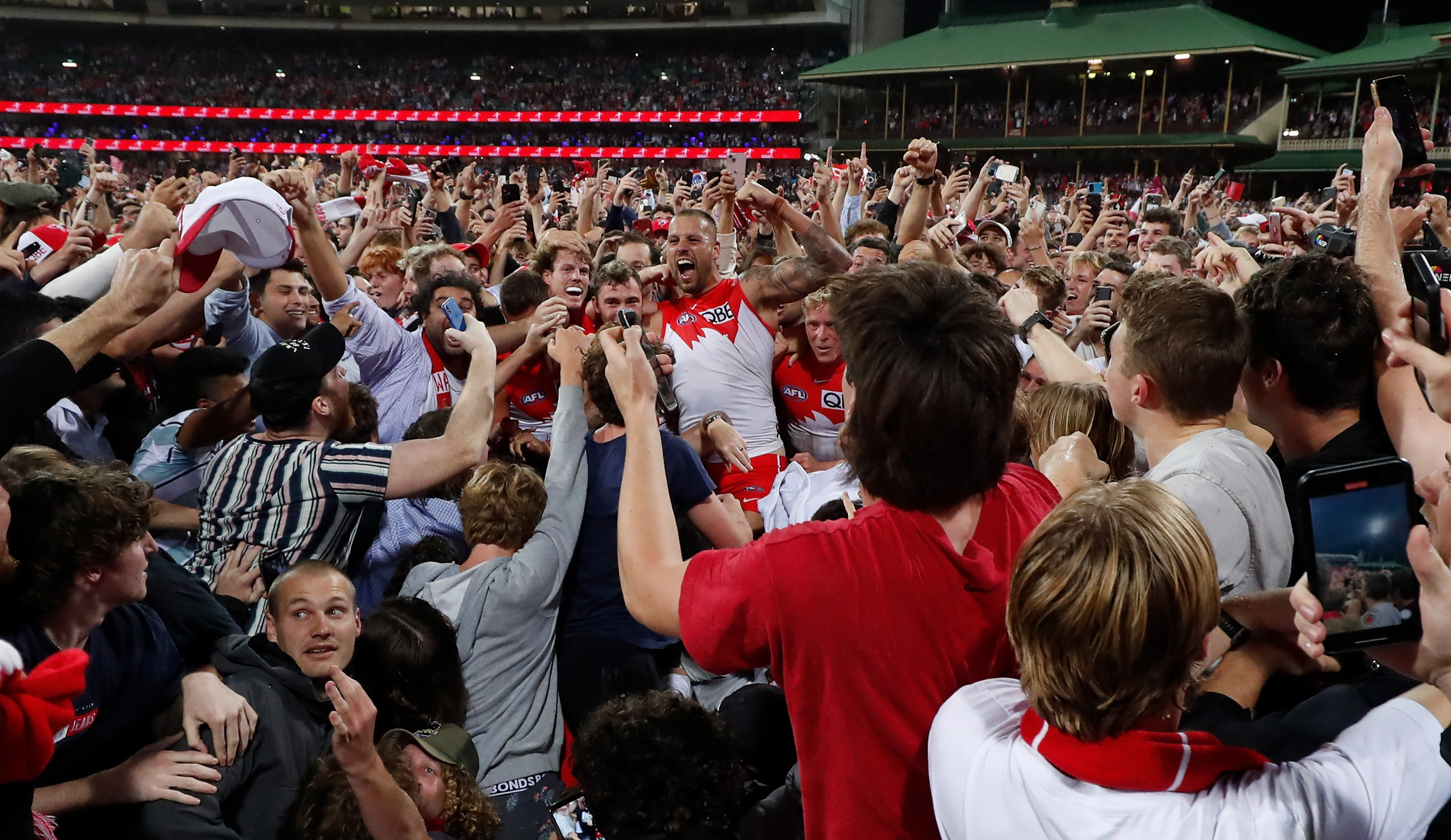 There was the bloke who flew over four rows to claim the footy, and apparently all legally-binding rights of possession available to him.

Zach Tuohy accidentally cleaned some guy up, then had to basically throttle him to return his phone and keys. A woman's ashes were scattered on the SCG turf. Chad Warner and Ollie Florent got lost and ended up wandering around outside the SCG trying to find a parent or guardian.

The AFL gave the security procedures the all clear, but there was something unsettling about the depth and intensity of the crowd Franklin found himself in. He managed the situation calmly, and with grace, but there were a couple of moments of justified concern that things could have gotten out of hand. It took quite some time for Buddy to force his way through the pack on the SCG.( Getty Images: Cameron Spencer )

Probably a good thing nobody is ever going to kick 1,000 goals again, in truth.

On Saturday, we had a brief evacuation at the MCG because a sprinkler went off above a stove or something, leading to mass confusion and panic for about five minutes. 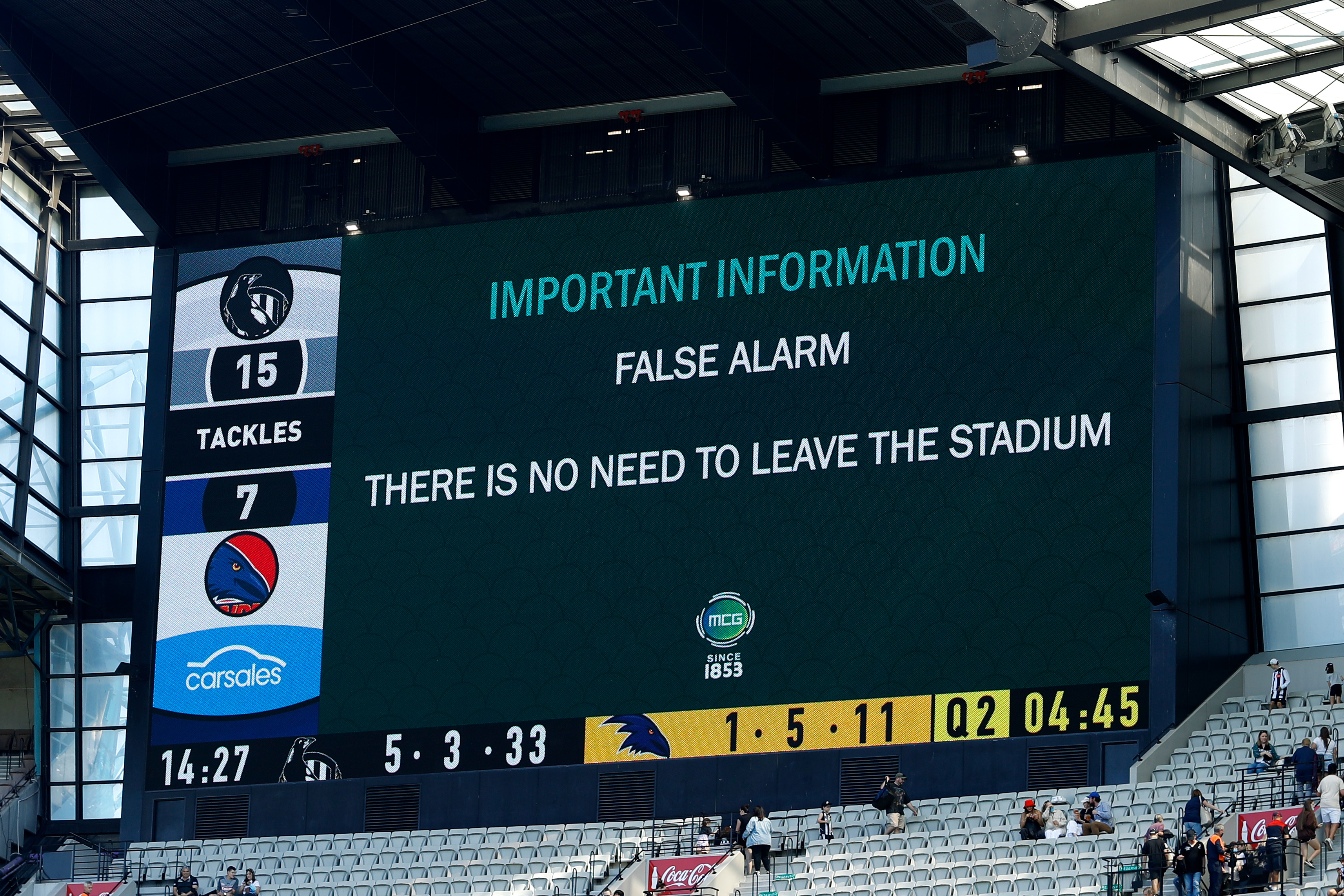 Crowds headed for the exit and players huddled in the centre square while fire alarms sounded at the MCG.( Getty Images/AFL Photos: Dylan Burns )

And then, on Sunday, the West Coast Eagles were forced to name a collection of tradies and actual children (not really) in order to make up a team against North Melbourne due to a COVID and injury crisis back in Perth.

Those ring-ins very nearly inspired the Eagles to what would have been a very silly win, only to get blasted by the stadium sprinklers immediately after the final siren. It was that sort of weekend, after all. 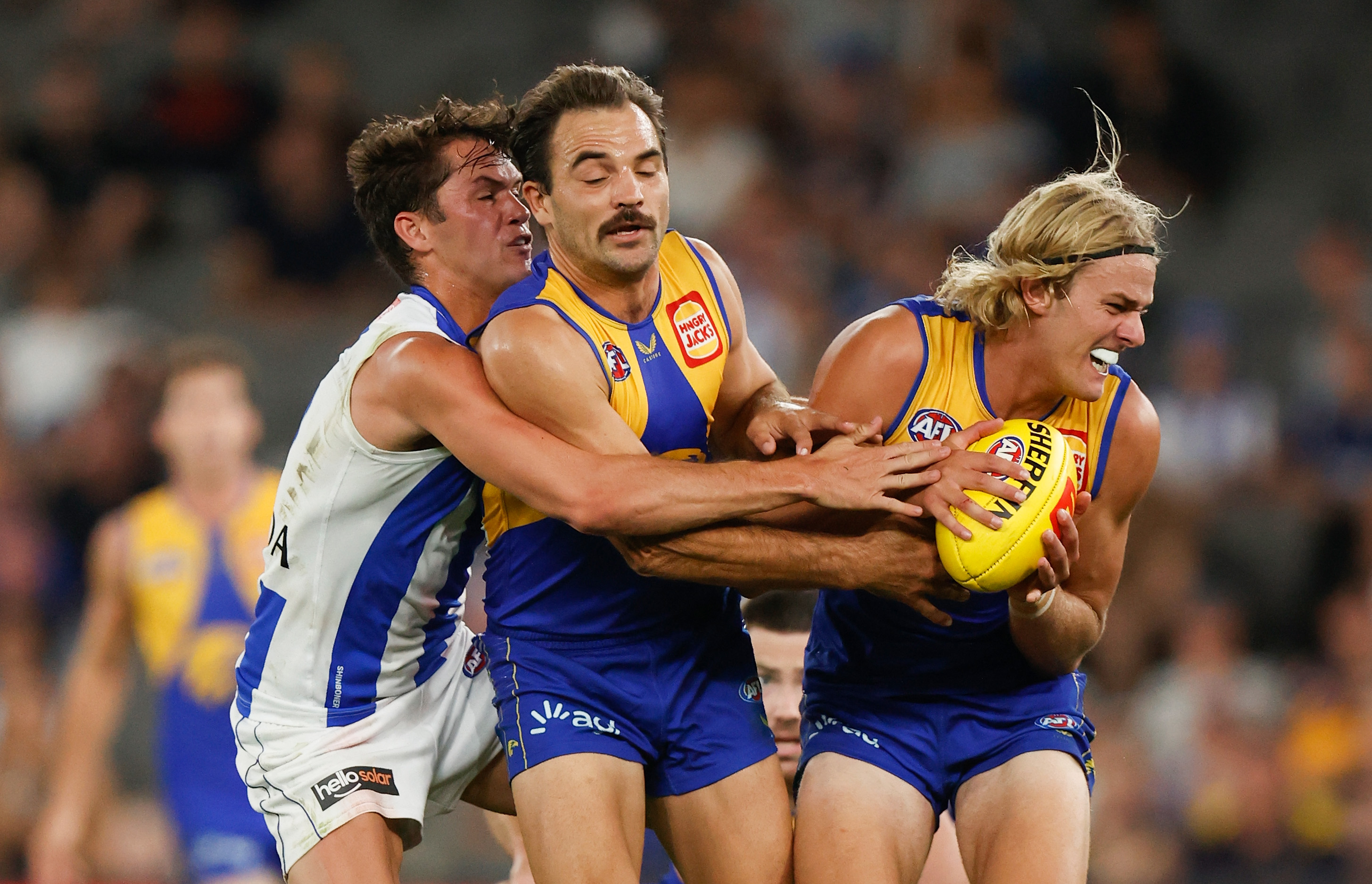 The Eagles were forced to call upon WAFL veterans and untried developing youngsters to make up a team.( Getty Images: Michael Willson )

We had three new coaches starting at clubs in 2022, and all three have started their reigns with back-to-back wins. 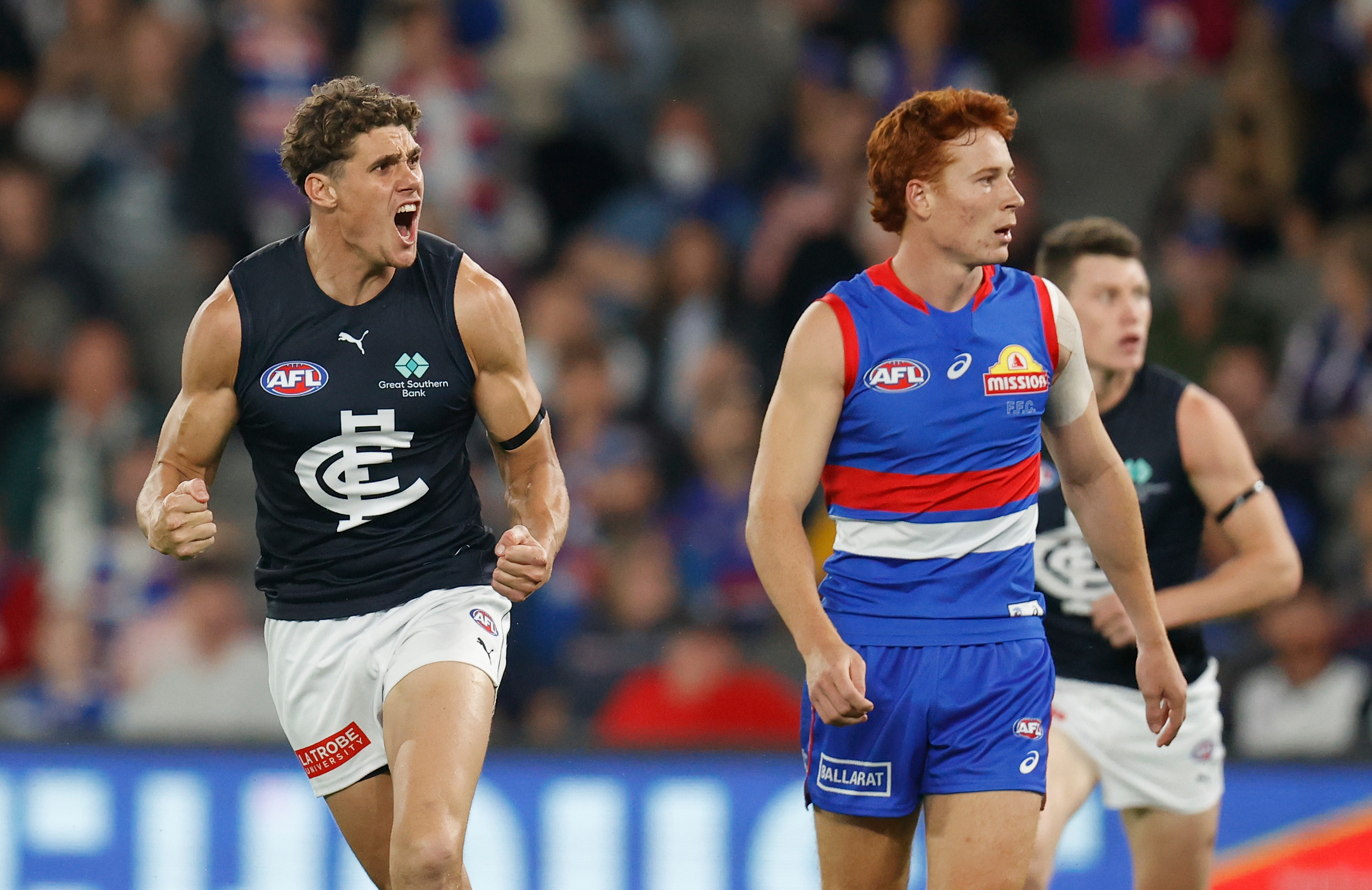 Michael Voss's Carlton and Sam Mitchell's Hawthorn were the big non-Buddy stories of round two, winning games against more fancied opponents with a very appealing brand of fearless, attacking footy.

On paper the Hawks are a little further back in their development than the Blues, who looked finals-ready on Thursday night, but their performance against Port should double as a mission statement for the Mitchell era. 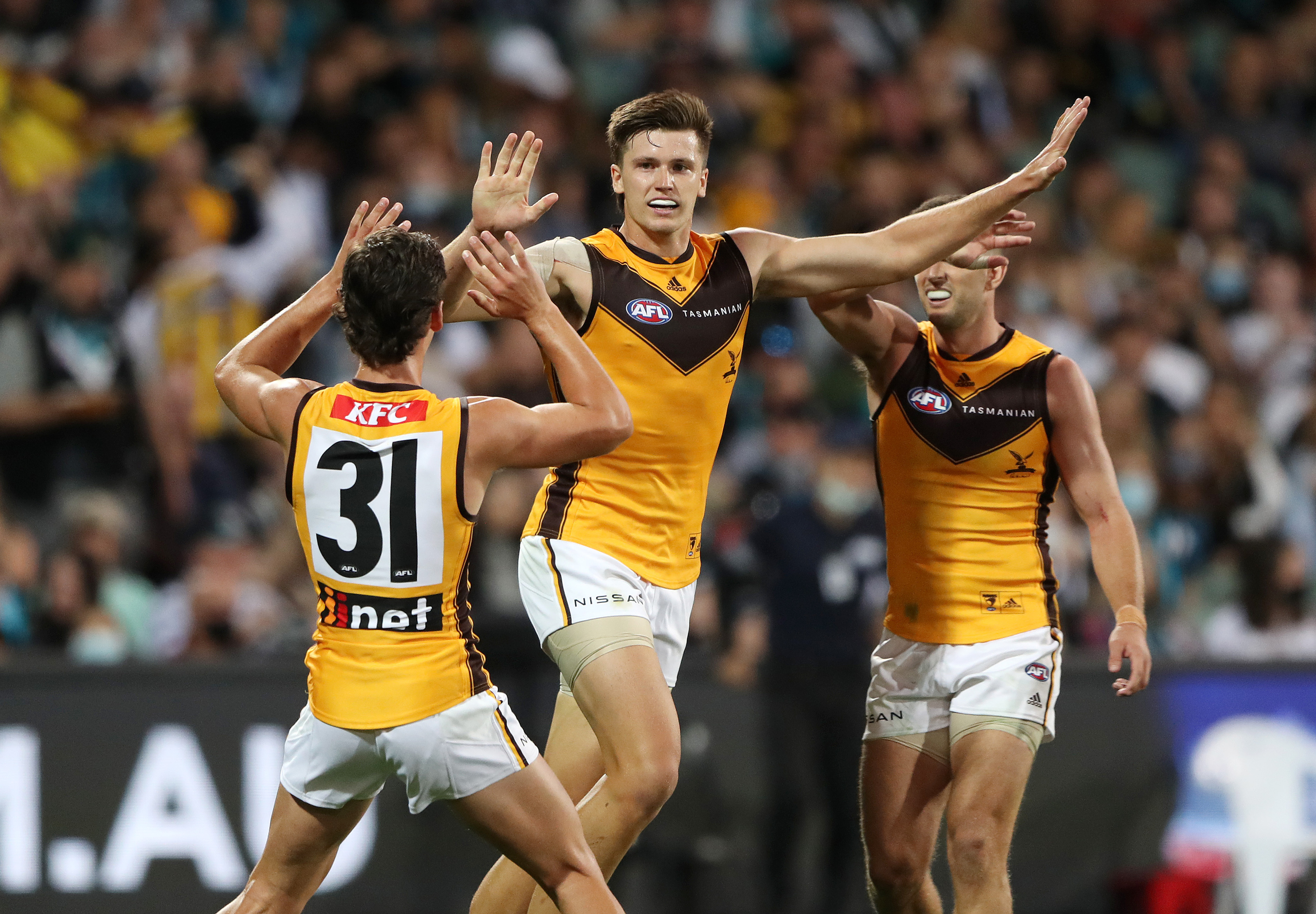 The emergence of Mitch Lewis has given the Hawks a key forward to aim at.( Getty Images: Sarah Reed )

The two teams meet next Sunday in what is suddenly a must-watch game.

Craig McRae's Collingwood meanwhile handled Adelaide with relative ease, and will face their first serious challenge of the year against Geelong next Saturday night. With the midfield in form and the half-back line playing on the front foot, a win is not out out of the question. 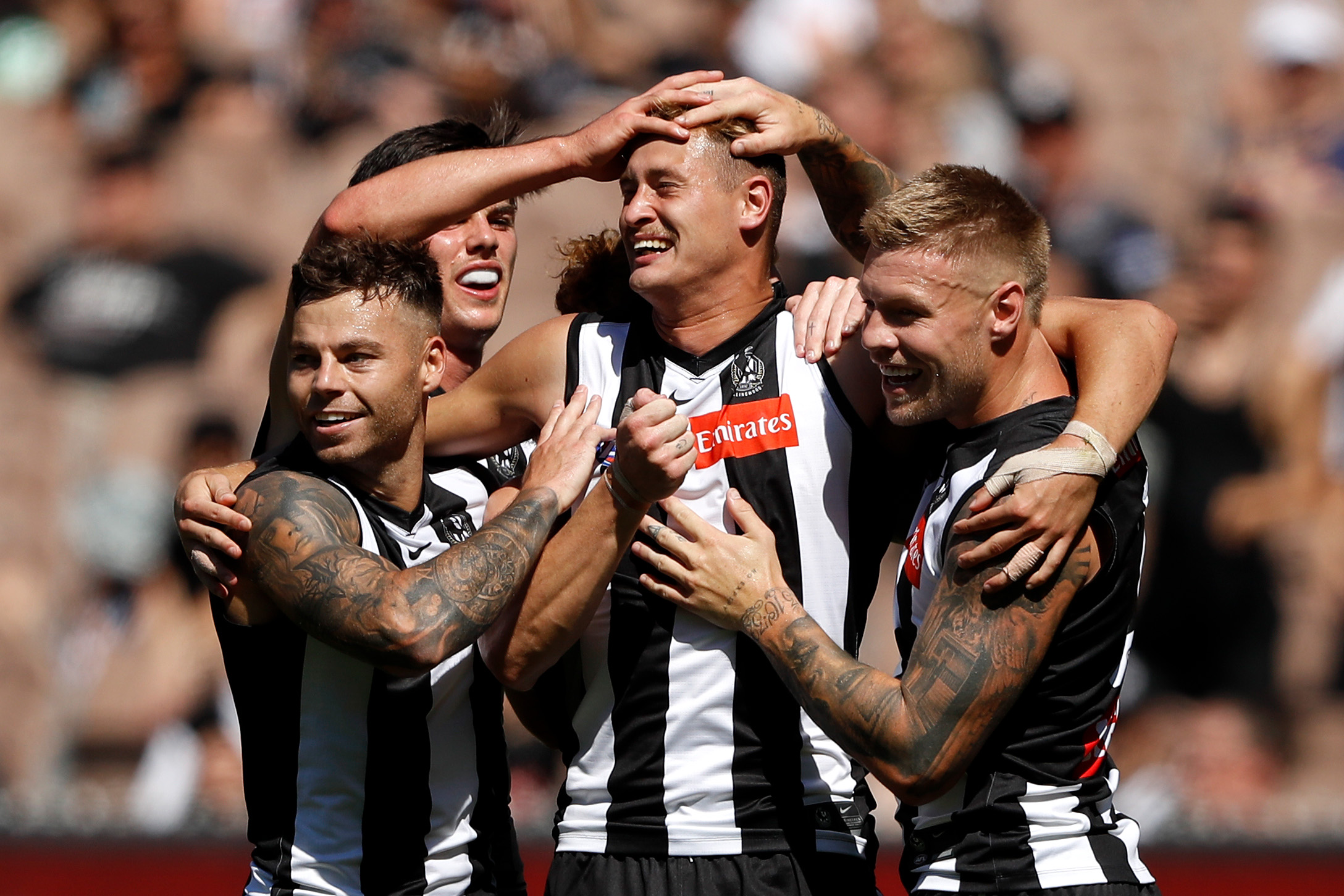 We've got a Showdown coming next Friday night, and both teams are coming in on serious low ebbs. The Crows are developing but are tying themselves in knots at the selection table, but the bigger issues are at Port Adelaide. 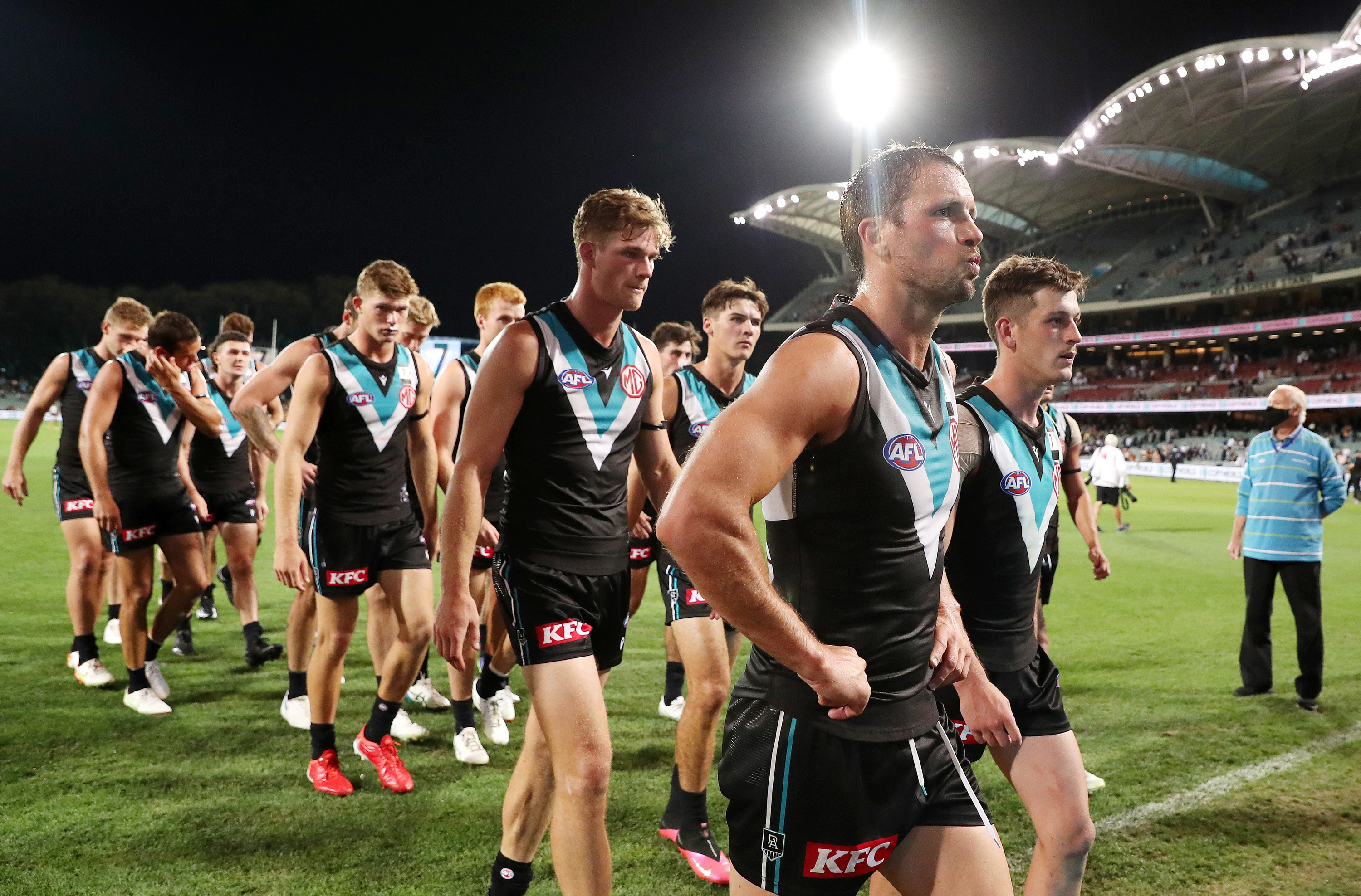 Port Adelaide have got some serious issues early in the season.( Getty Images: Sarah Reed )

For the second game straight, the Power were timid in possession and lazy out of it. They are unrecognisable from the team who have made prelims in each of the last two seasons. If they lose this one to the Crows, the sky might start falling at Alberton.

There were three virtuoso midfield performances over the weekend, but which of Patrick Cripps, Lachie Neale and Christian Petracca played the better game? The ranking points give the nod to Neale, and the eye test doesn't disagree.

Essendon gave the requisite response for a quarter against the Lions, but as the game settled found themselves outmatched, outworked and outclassed. An 0-3 start looms with Melbourne on the horizon next week, and finals are historically a long way back from there. 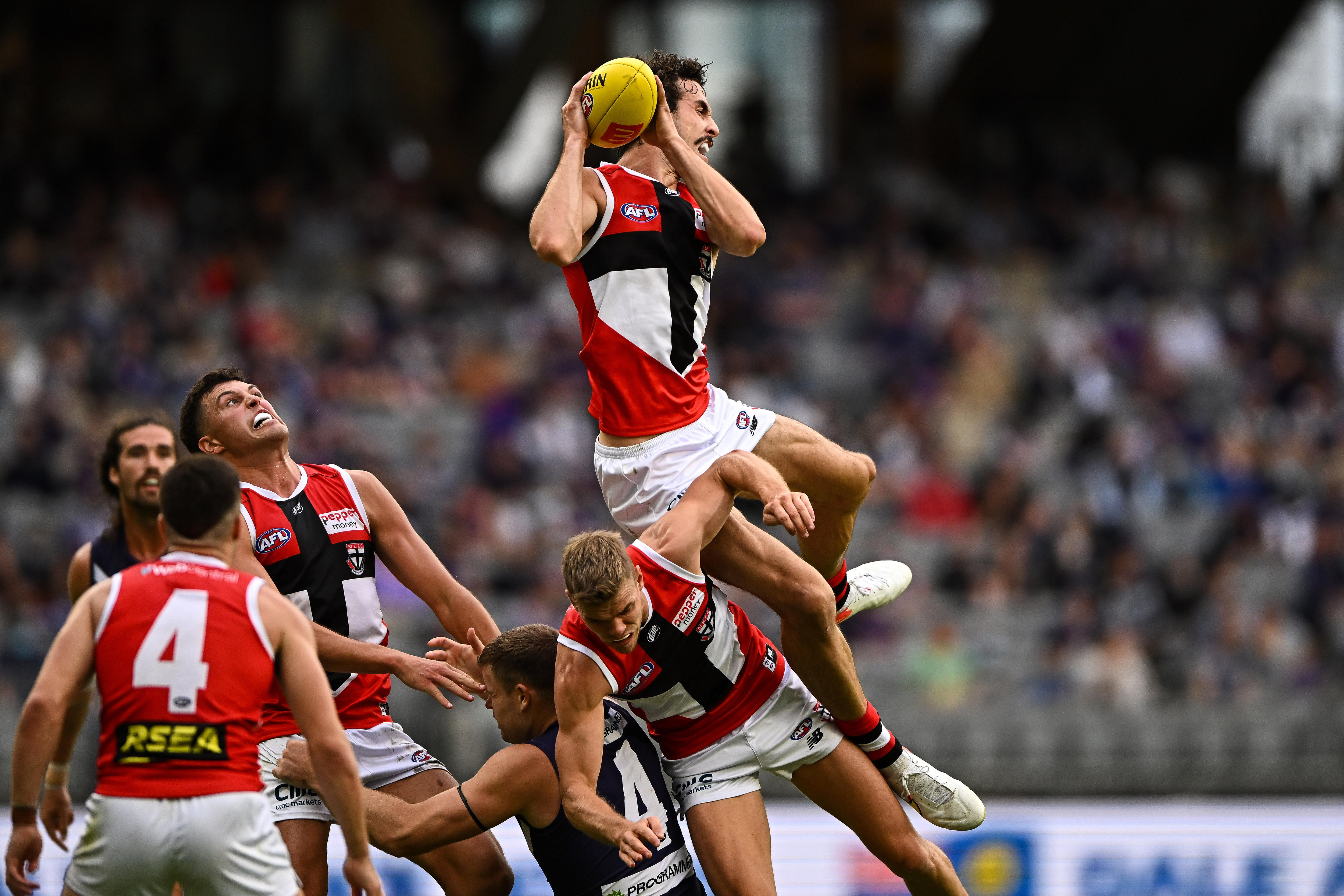 Max King was outstanding as he led St Kilda to victory in the second half.( Getty Images: Daniel Carson )

And how about Max King? St Kilda were at risk of letting a solid performance waste away to nothing before the big guy completely took over. This was a strong response from St Kilda, and if that kind of ferocity is sustainable they will be back in business.

Fremantle, for their part, were worryingly poor and could have gone down by more had the Saints been a little more dialled in before half-time. A preseason of promise is arguably on the line in next weekend's derby.

It seems like the three Rising Star favourites will have to wait a little longer for a nomination, as Jason Horne-Francis, Nick Daicos and Josh Rachele all played decent games without excelling.

This week it'll come down to two Hawks, Josh Ward and Connor MacDonald. Ward probably gets the nod this time, but the creativity of MacDonald is already critical for Hawthorn. Some draft that for the Hawks.

It was a low-key week for hangers, but Mitch Hannan's two-grab effort against Carlton should win this week's award. It's probably the best of the year so far too, it's been a slow start on the specky front.

Goal of the week is a tougher shout, with Hannan, Oli Henry, Jack Gunston and Toby Nankervis all offering entries.

But for the slickness of the handle, the sweet sidestep and precision snap, we're giving it to Kossie Pickett this time... but Michael Frederick's round one volley remains the snag to beat.