The many strands from a Queen's Birthday classic

Where do you start with Monday's game? One of the best of the season, those three hours at the MCG offered up more storylines and questions than almost other this year.

It's easiest to start with Melbourne, who are now officially on a losing streak. The Dees dropping three games all year felt almost impossible a month ago, so for the reigning champs to have lost three straight into the bye is quite an alarming turn of events.

Coupled with what can only be considered off-field turmoil, the Demons find themselves at a crossroads. This moment right now is either the death of a dynasty or a recalibration point.

It's suddenly very difficult to pick which path they will take.

As for Collingwood, their whole season has been building to a day like this. Strong performances didn't always lead to positive results in the opening month or two, but they are now getting reward for what is clearly top-eight-worthy play.

They are one of, if not the best pressure and tackling team in the league. Their half-back line is an electric attacking force, supported by the steady presence of Jeremy Howe, Darcy Moore and co. 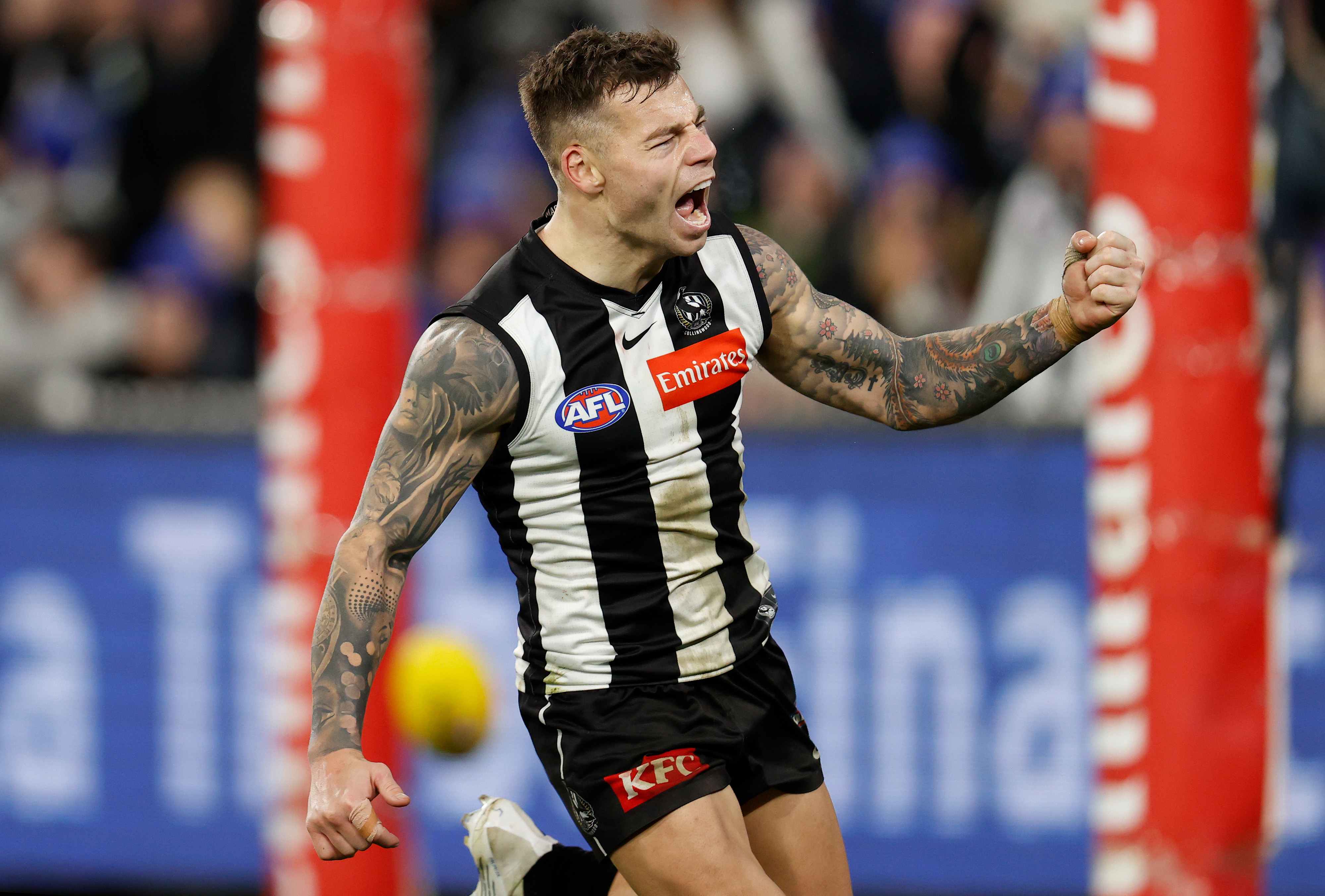 Collingwood are in the eight, and are looking good for a return to finals.( Getty Images: Michael Willson )

The combination of heat at the coalface and willingness to counter-attack at all costs is a tough one to beat. Only their own inaccuracy threatened to thwart them against Melbourne.

The narrative around Collingwood is no longer if they are good enough to play finals, but how high in the eight they can finish. There's a top three in the league right now, and then at least six teams in a group below that, of which the Pies are justifiably one.

And finally, a word for Mason Cox.

There's something transcendent about a Mason Cox Game, and he's produced probably three or four of them in his unique career thus far. The lift he gives his teammates and supporters when it's all going his way is palpable, and worth much more than marks or goals.

When Cox is on like that, it's a shared experience for everyone who loves footy. He's a confounding player, but he alone has produced more joy for football fans than most.

The simple solution to the Fyfe conundrum

Saturday proved both a success and a failure for the "Throw Nat Fyfe Forward" movement, which despite the recent groundswell has actually been developing for a number of years. 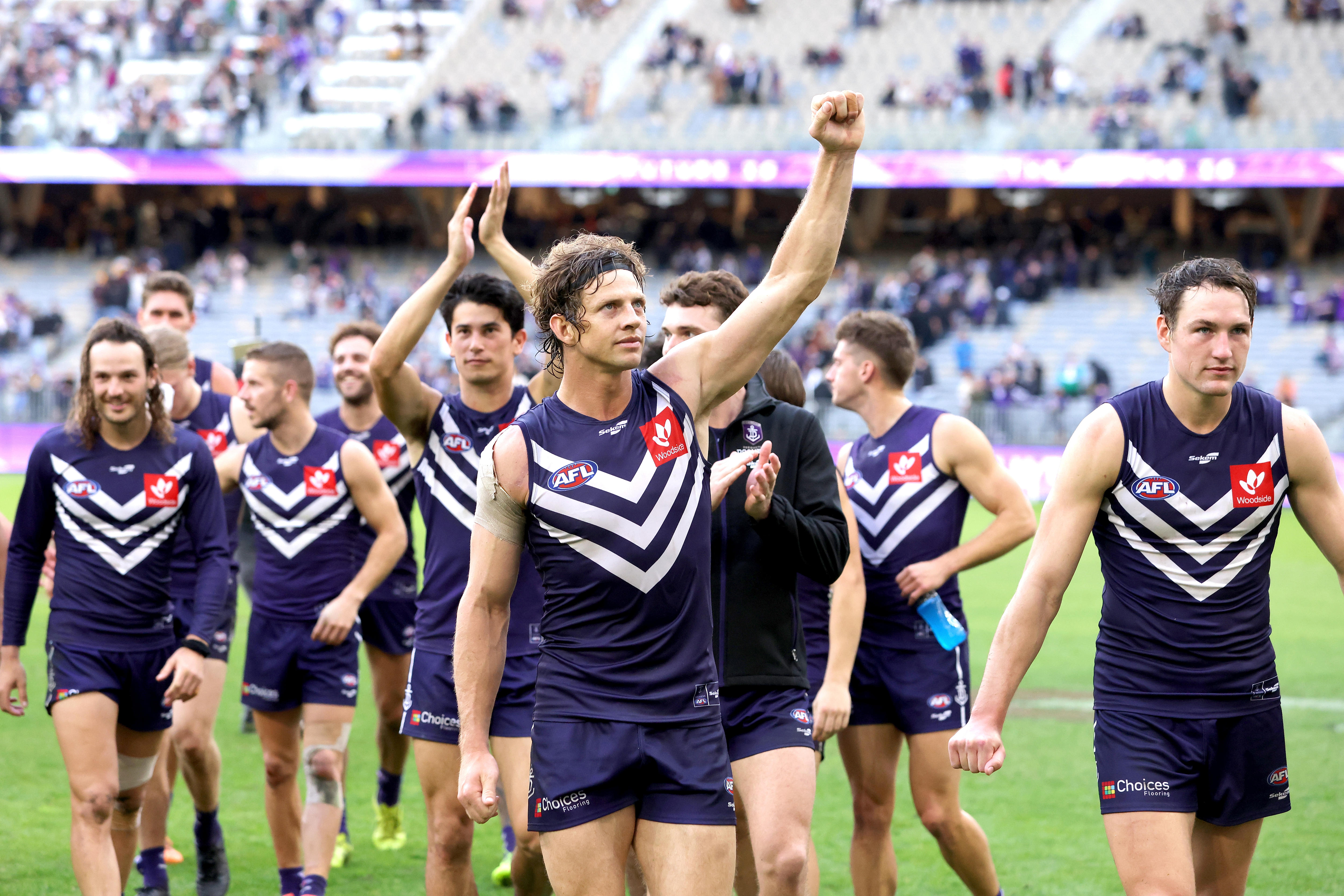 Nat Fyfe played his role for Fremantle against Hawthorn, and that's all he needs to do.( AAP Image: Richard Wainwright )

The thought that this version of Fyfe might best serve Freo in the forward line came well before his back injury, from the recognition that the Dockers' young midfield group was on the precipice of taking ownership, but their forward line lacked a focal point.

It wasn't an idea Fyfe himself was keen to entertain in preseason, but things have shifted quickly and dramatically for our wharfie friends in Freo. Those young mids have taken charge and not looked back, and a willing batch of small forwards surrounding Rory Lobb have proved a capable mix.

Which left many wondering before this weekend just where Fyfe would fit. We shouldn't have been surprised by the answer. 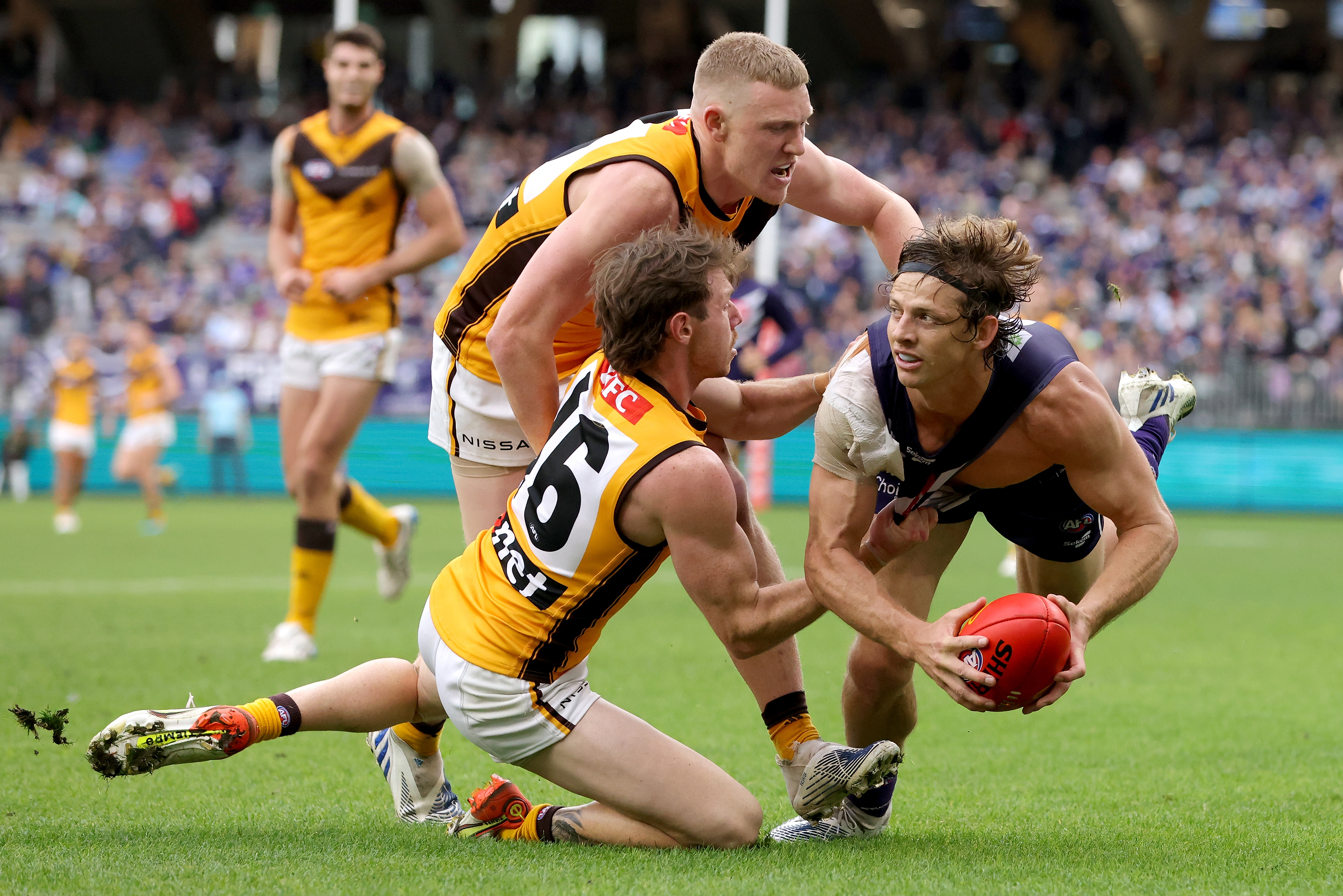 When he played forward, he had a gravitational pull that freed space for teammates. And despite spending only half his time in the guts, no Docker managed more clearances than the two-time Brownlow man.

All this with the rust of a long absence still conspicuously clinging on. Fyfe doesn't have to be the final piece or the cherry on top, he can just be himself, capable of playing multiple roles and excelling in any of them. 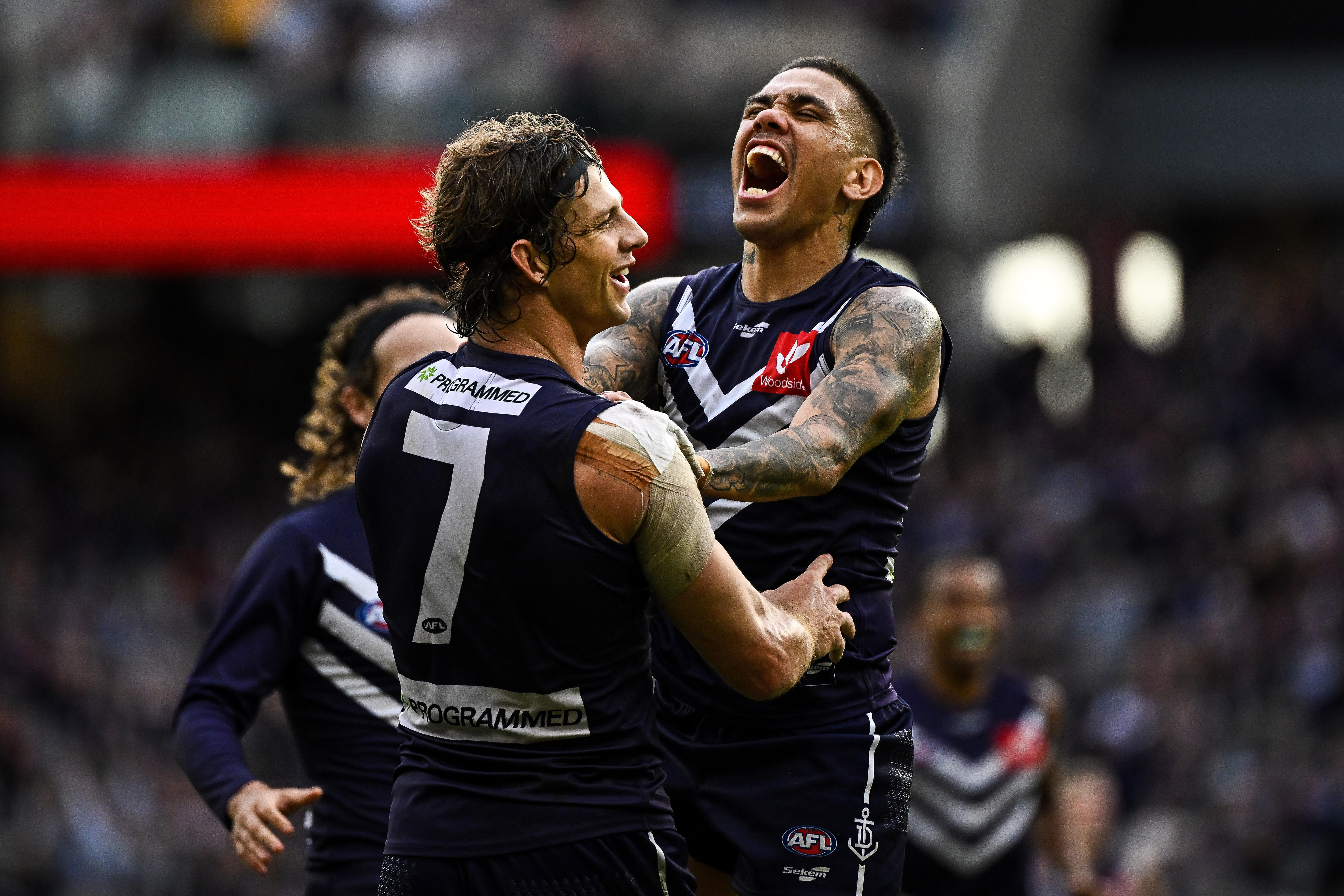 Fyfe may one day settle down as a more permanent forward, but that day hasn't arrived yet. Having been built on such solid foundations, that sort of flexibility will be invaluable to a Freo side now waiting to find out if they are ready for that next step in September.

The Bombers' pre-game celebrations on Friday night were quite something. Essendon's players responded to the emotion of the evening, but Carlton successfully doused the flames and won with solid structure and class. Like good teams should.

The Jason Horne-Francis situation is getting a bit concerning for North now. He is clearly frustrated with his and the team's state of affairs, and the contract situation is alarming, but he's not playing well either. A bye and a suspension might offer a good chance to sit down with the club and sort things out. 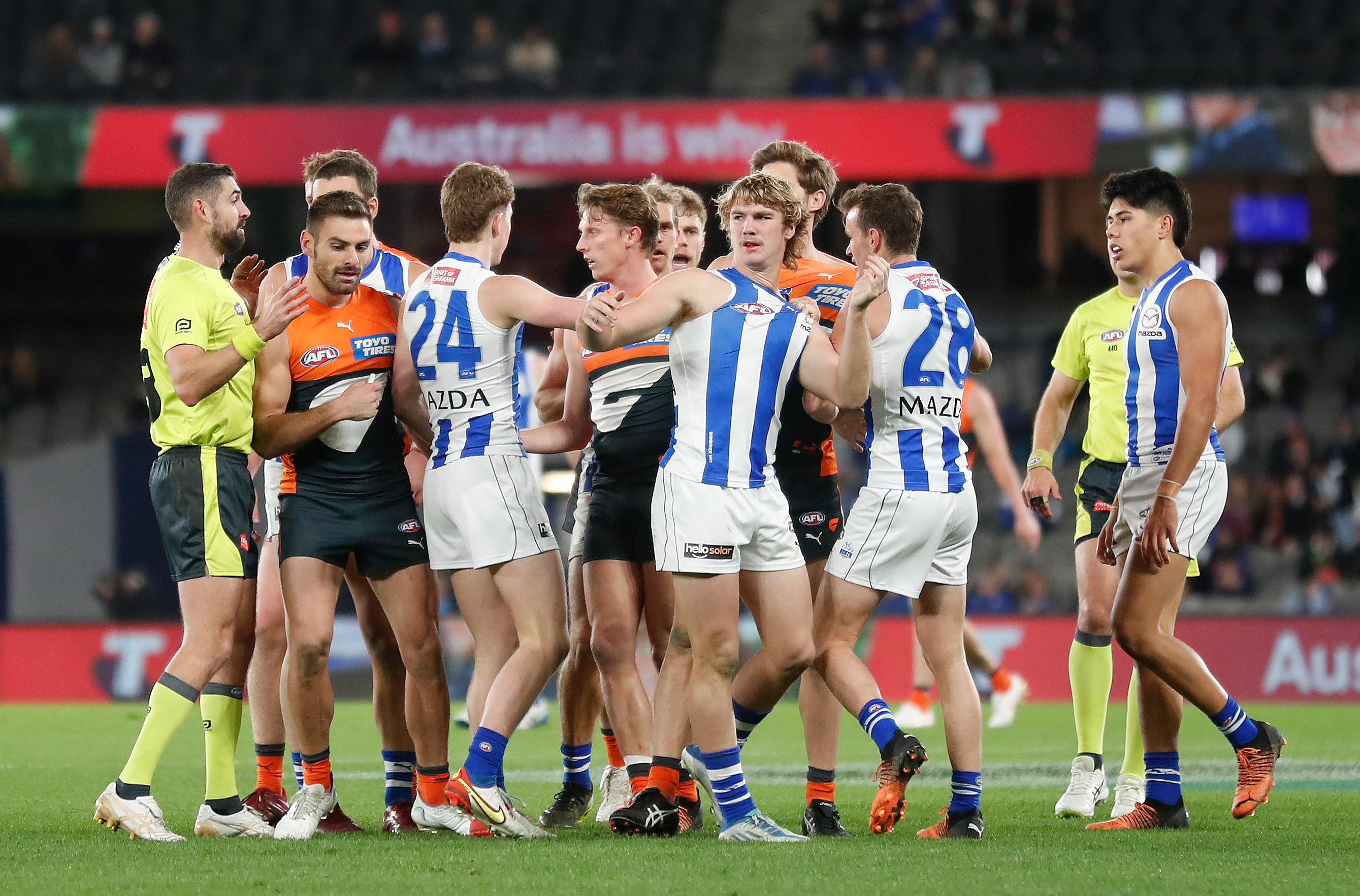 Port Adelaide weren't horrible at all against Richmond, but their 0-5 start meant they had no margin of error for the rest of the season and a few upsets would be required on the run home. They're too far back now.

The Lions are limping their way to the bye a bit, and simply had to find a way to beat St Kilda on Saturday night. It was pretty rough, but it was good enough. They're now wonderfully poised atop the ladder at the turn.

Two brilliant weeks on the trot have seen Nick Daicos nudge ahead in the race for the Rising Star, in front of the likes of Nic Martin, Jai Newcombe and Sam De Koning.

And yet Daicos is still capable of more in a creative and attacking sense, and may well need to show it by the end of the season to hold off the tough competition behind him.

Connor Rozee's fresh feet and tidy finish earn him the goal of the week, but for now Ed Langdon remains the leader in the GOTY race.

And in another pretty meagre week for big marks, Curtis Taylor can have mark of the week — his teammate Cam Zurhaar's grab in Perth is still the one to beat.