A Giant of the coaching game is farewelled in somewhat disappointing fashion, while the Saints seize their moment and steal the spotlight.

The Cameron era ends with a whimper

The farewell game for a coach is always a weird one. To have earned one, it means that what the coach has done in the previous years has been worthy of merit, but whatever he is doing now is not much chop.

More often than not, it inspires one last lift from the same players who have been letting him down. For 16 horrible minutes on Sunday, it didn't even look like Leon Cameron would get that from his GWS. 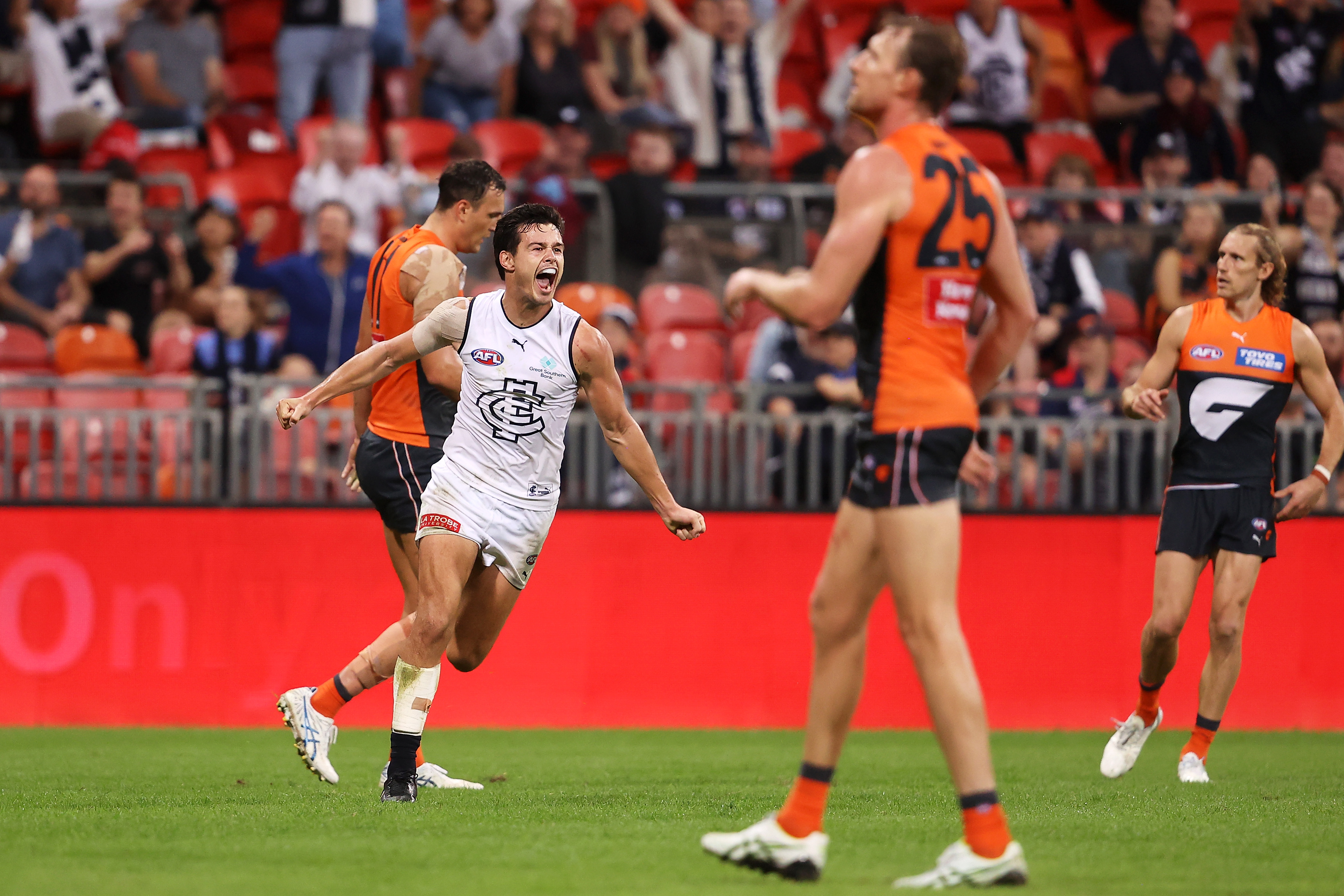 A slow start for the Giants proved decisive as they failed to run down the Blues.( Getty Images: Mark Kolbe )

Thankfully, the Giants rallied to save face, but the damage was done in that flat opening stanza. There will be regret among GWS players that such a poor start meant they were unable to properly see their coach off.

Cameron deserves to be remembered fondly for his work at GWS. Much of the talk last week was about the team's run to the 2019 grand final, but 2016 was the real chance.

Had the Giants scraped past the Bulldogs in that outrageous preliminary final, they would have been hot favourites to beat Sydney — the same team they had beaten in their first final two weeks earlier — in the big one.

That team was good enough that dynasties were predicted before a grand final had even been reached. Whenever the next great Giants team arrives, it will owe a debt of gratitude to everything Leon Cameron built.

Saints the story as Cats can't keep up

If you squinted, it could have been 2009 again. St Kilda and Geelong under the Docklands roof, flinging the footy from end to end in the match of the round.

On paper, the Saints were coming into this game off a 38-point loss to Melbourne and Geelong were off a 53-point win over GWS, but anyone who watched those matches knew that form line was misleading. 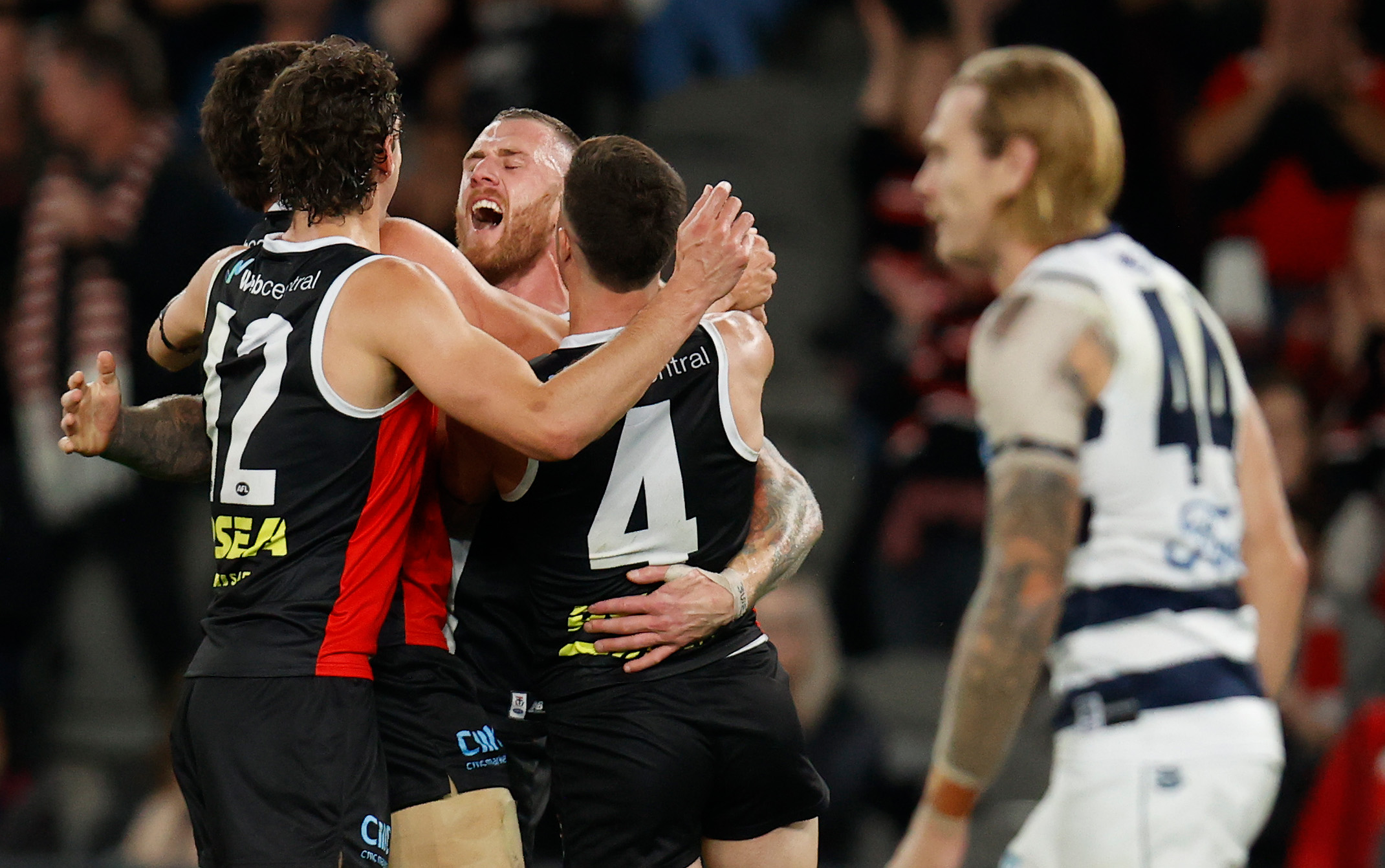 St Kilda showed something against the Demons, enough to suggest they could seriously challenge any team made up of mere mortals.

It took a while for them to warm up to that level, but once the Saints hit top gear, Geelong couldn't keep up.

Quite literally. The defining image of the second half was of multiple Saints jerseys streaming away from multiple Cats ones. The pace was too much, the effort above where Geelong were capable of going.

The discrepancy between the teams on the day was personified by Paddy Ryder, who produced a performance so dominant that you can already see it being used to justify Geelong's inevitable trade period move for Todd Goldstein.

The Cats are what they are, and in an even season still can not be discounted for a top-four finish. But St Kilda's story is far more intriguing. The glimpses we have seen of their in 2022 are becoming more frequent, and even more devastating.

What a wonderful day for Stuart Dew and his Suns. As we have banged on about in the Round-Up this year, Gold Coast are much closer than people might realise. As for Freo, this changes nothing — a bad day, a tough trip, a lesson learned. 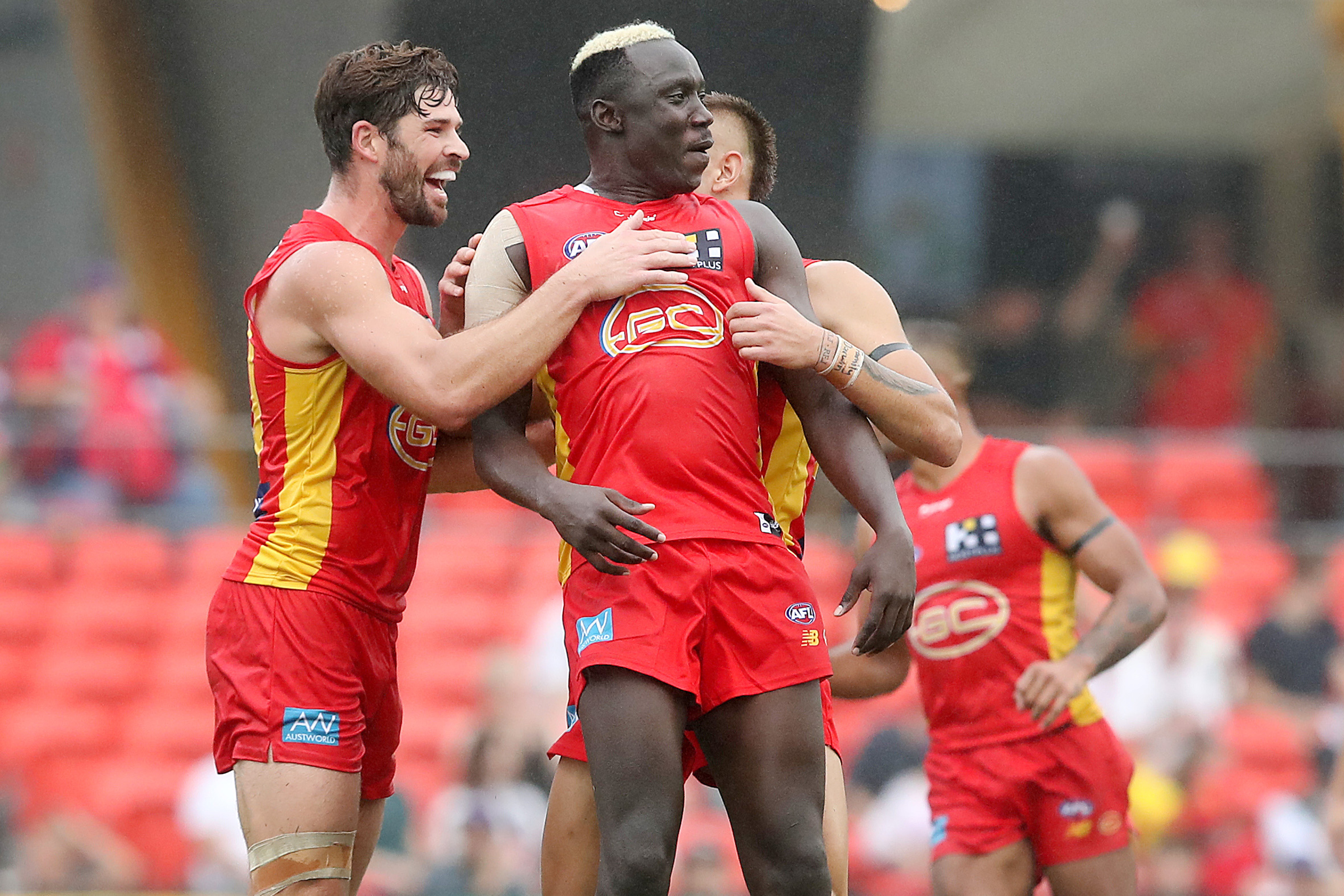 Gold Coast's win over Fremantle was special, and just reward for a team on the rise.( AAP: Jono Searle )

Moneyball reference alert: You know the scene where Brad Pitt tells fake David Justice the Yankees are paying him $3.5 million a year to play against them? That's Adam Treloar and Collingwood right now. And the Dogs are laughing all the way to the bank.

For a hot second, Brisbane looked in real trouble against Adelaide on Saturday night. Then Lachie Neale decided he would quite like to win the game, and he made it so. What Lachie says, goes. 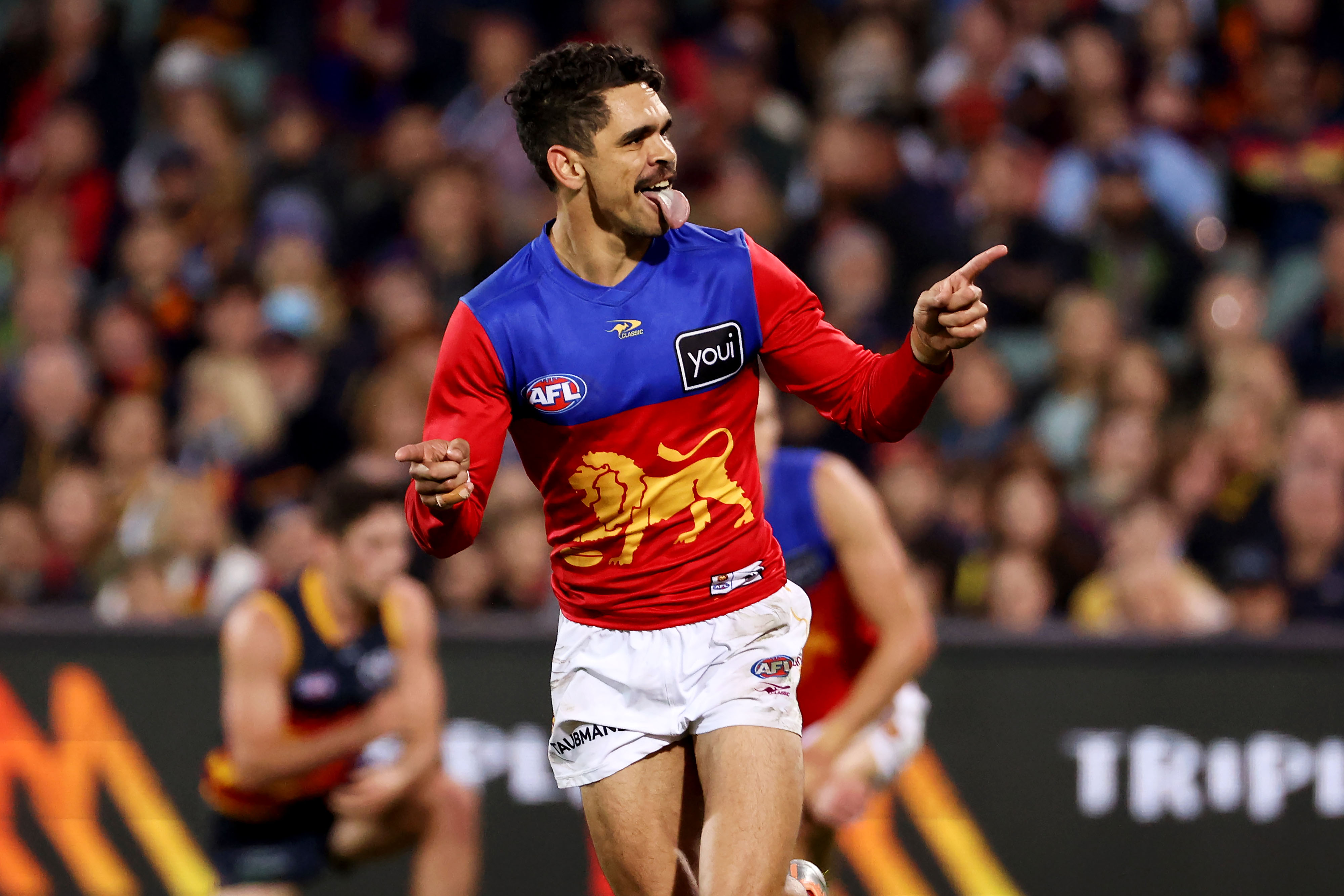 Who could have seen Essendon's immediate reversion to poor form coming? Most people, probably. The balance is off at the Bombers, the good buried so deep beneath timidity and a lack of true commitment. 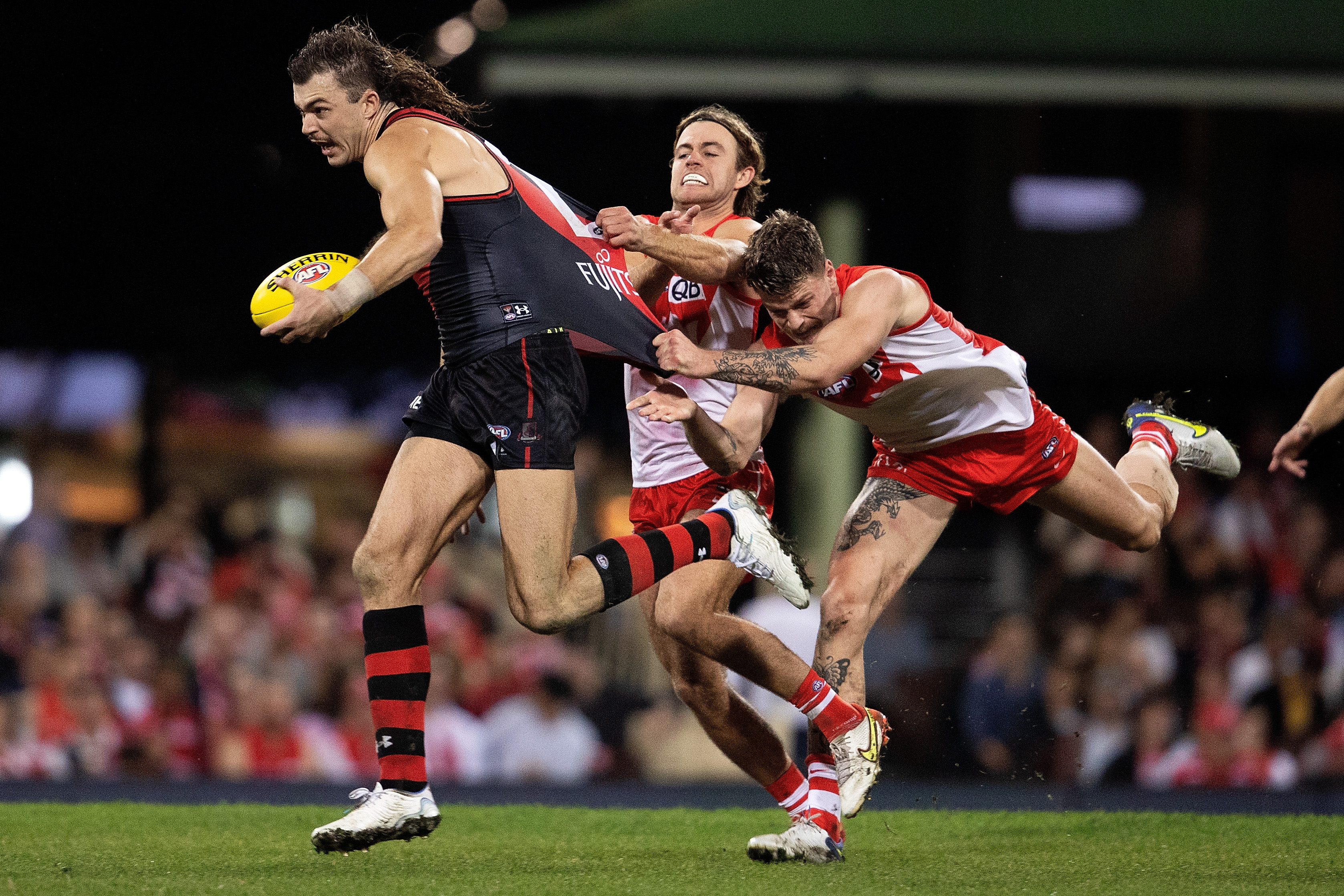 The Bombers hardly mustered a challenge for the Swans.( Getty Images: Mark Kolbe )

The Hawks look every bit like a young team still a long way from where they will one day be. Their best isn't yet sustainable, but it's good enough to give an ever-improving Richmond a proper game.

North Melbourne have been at the "can't question the endeavour" stage for too long now. The Roos crack in. But they do not have the skill or system to win games of football. Something has to give in that space between now and round 23. 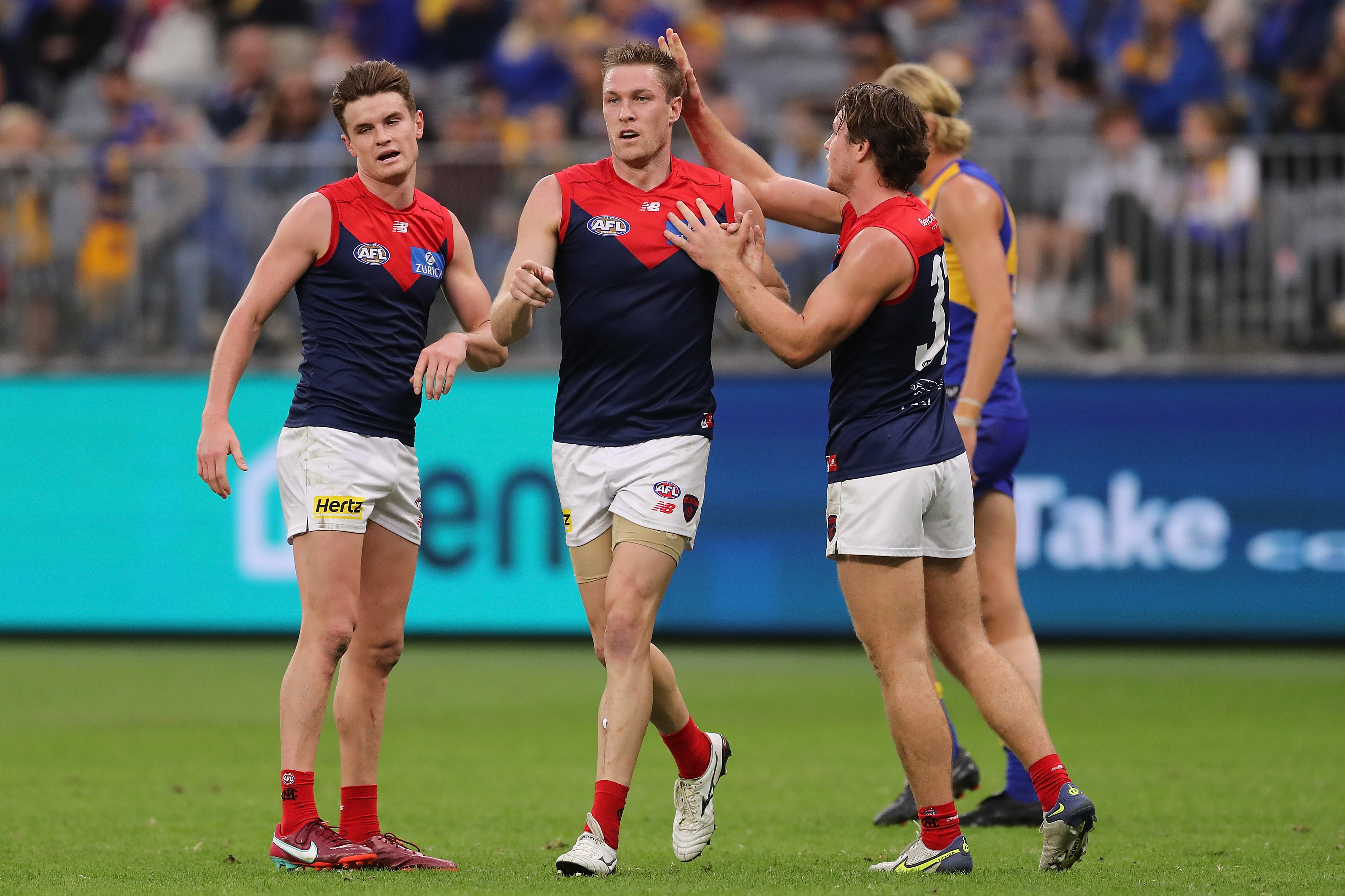 It was a relative walk in the for the Dees in Perth.( Getty Images: Will Russell )

Melbourne beat West Coast by a lot, and that's about all there is to say about that one. Sixteen wins a row is quite something, and with North Melbourne next week, 17 looks a near certainty.

It was a low-key round for the Rising Star hopefuls, so Nic Martin maintains his lead almost by default.

It looked like Sydney put specific effort into stopping Martin on Saturday night, so his young career might be approaching some new challenges in coming weeks.

We're giving Aaron Naughton the honours for this week's best mark, with Cameron Zurhaar's grab from last week still the frontrunner for MOTY.

And Dustin Martin pips Dayne Zorko for goal of the week, with an effort that needed several replays to be fully comprehended.

Ed Langdon remains on top of our GOTY rankings though.