Max King and Jack Higgins have produced an inspired third-quarter burst to help lift St Kilda to a 10-point AFL win over Fremantle at Perth Stadium.

King tallied just two disposals in the first half of Sunday's match, but he burst to life in the third term when he booted three goals in the space of 132 seconds of actual game time.

King, who took a strong mark with six minutes remaining in the match to kick the sealer, finished with four goals and four contested marks in a match-winning display.

Higgins, who kicked 0.4 in last week's loss to Collingwood, tallied 4.2 from 16 possessions as King's partner in crime.

Dockers ruckman Sean Darcy limped off early in the second half with a right ankle injury, and he was eventually subbed out after making a brief return to the field.

St Kilda's inaccuracy cost them dearly in a hard-fought first half that featured plenty of huge bumps and tackles.

Dockers goalsneak Lachie Schultz produced the highlight of the first term when he thumped back a bouncing ball on the boundary line for Travis Colyer to run onto and kick a goal.

Turnovers from Fremantle duo Hayden Young and Jordan Clark gifted the Saints two quick goals early in the second term, but the Dockers' efficiency up forward ensured they entered half-time with a 12-point buffer.

St Kilda had 2.7 to their name at the break, with Membrey posting 0.3.

It was the Higgins and King show in the third quarter as the Dockers lost their way.

King's three-goal burst in the space of two minutes was particularly destructive, with each goal coming from a mark.

The 18-point lead to St Kilda at three-quarter time would have been even more if King and Higgins had nailed their set shots just before the break.

The Dockers dominated for long periods of the final term, but their wayward kicking into attack meant the Saints' defenders picked them off time and again.

Tigers off the mark with win over Giants

Richmond have overcome the loss of several key players to beat GWS by 36 points in their first MCG clash since the Tigers' 2019 AFL premiership.

Half-backs Jayden Short and Nathan Broad were prominent and former captain Trent Cotchin also starred as the Tigers led for most of the game to win 16.13 (109) to 10.13 (73).

Phil Davis (hamstring) and Daniel Lloyd (shoulder) were also hurt as the Giants fell to a 0-2 start to the season, while Richmond rebounded from last week's loss to Carlton.

Noah Balta kicked four goals for the Tigers, while GWS on-baller Callan Ward had 28 disposals in his 250th game and teammate Tom Green had a game-high 34 possessions.

The last time these two teams played at the MCG, Richmond restricted GWS to three goals and mauled them by 89 points for the 2019 flag.

Some of the most important players from the 2017-20 premiership three-peat were missing on Sunday. Dustin Martin is taking time off for personal reasons, while fellow front liners Dion Prestia, co-captain Dylan Grimes and Jack Riewoldt are all injured.

But the Tigers played with much more system and poise than GWS. 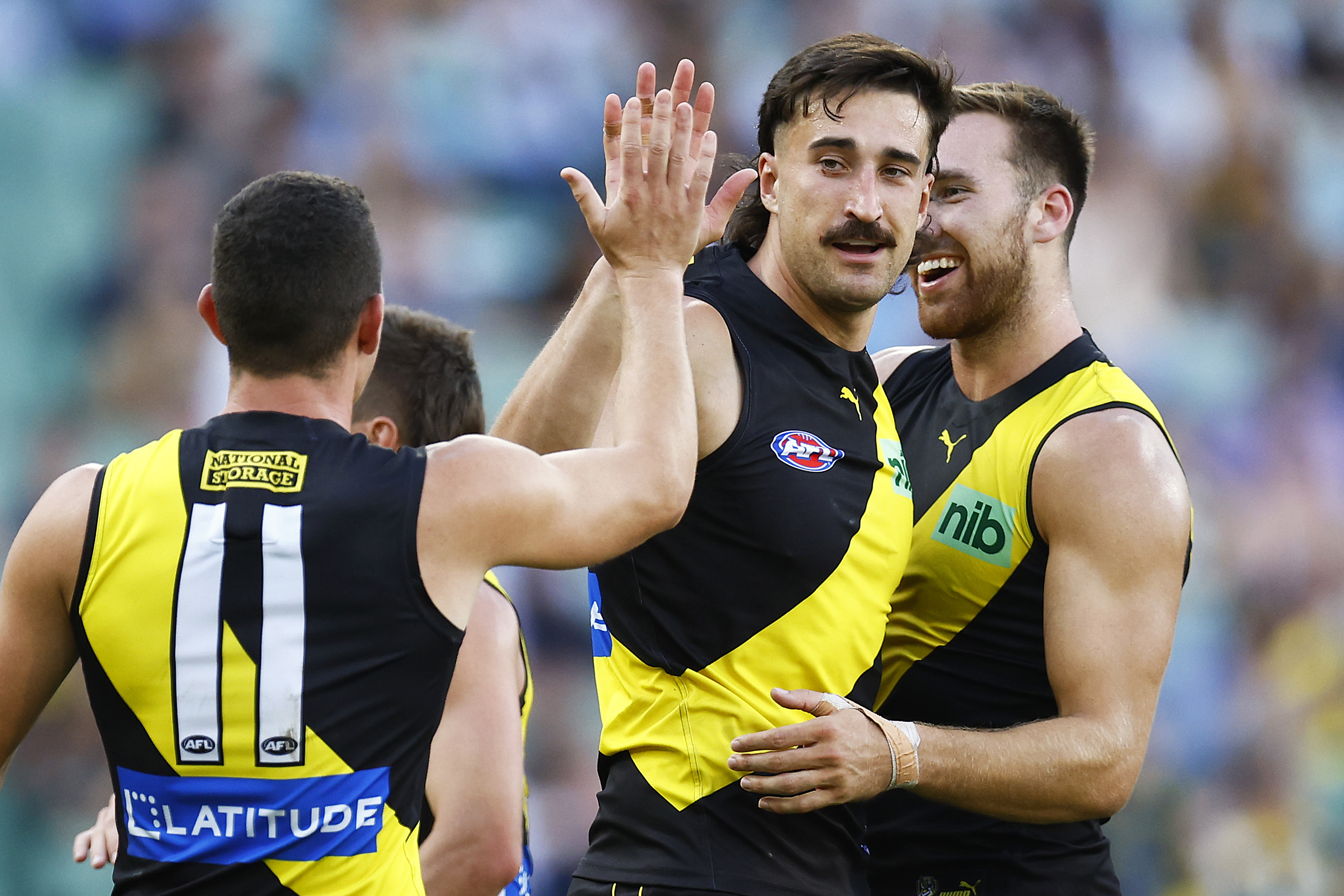 The Tigers pushed ahead in the second half for their first win of the season.( Getty Images: Daniel Pockett )

Late in the first term, Lloyd and teammate Jake Riccardi collided on the wing and Lloyd was taken to hospital for X-rays on his shoulder.

After the Giants kicked the first goal of the second term to take the lead, the Tigers broke the game open.

Richmond speedster Shai Bolton sparked the surge with two goals and they kicked another two to lead by 20 points.

As GWS fought back, veteran key defender Phil Davis dived to chase down an opponent and ripped his left hamstring.

Davis immediately put his hand up as he lay on the ground, well aware he had suffered a serious injury.

GWS were still in with a chance when Josh Kelly kicked his third goal and reduced the margin to 20 points in the last term.

But a three-goal run sealed the win for the Tigers.

North fall over the line against depleted Eagles

North Melbourne spearhead Nick Larkey has kicked six goals as the Kangaroos scratched their way past a severely depleted West Coast in a 15-point AFL win.

Hit by a COVID-19 tsunami this month, the Eagles selected three debutants in a makeshift team on Sunday. 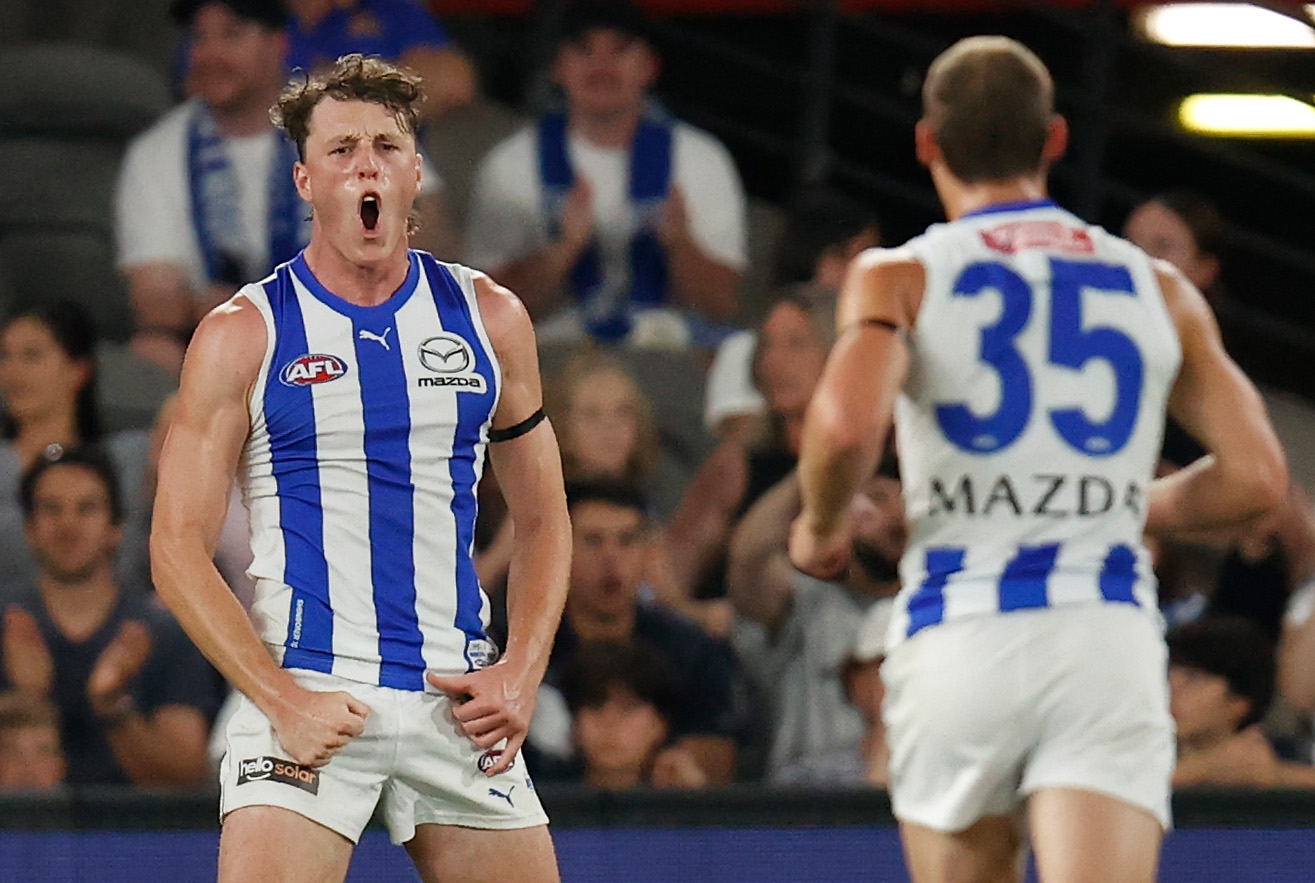 Nick Larkey was the difference between the teams.( Getty Images: Michael Willson )

And they were ultimately forced to field five top-up players from their contingency list after losing defender Jackson Nelson to a knee injury during the warm-up.

It came at a cost as Luke Davies-Uniacke was substituted out of the match after a head knock and Tarryn Thomas was taken to hospital with a rib injury.

It was the first victory of the season for North Melbourne, who claimed the wooden spoon last year, while West Coast are winless from their virus-affected start.

Larkey booted four goals in the first half and finished with half a dozen, one shy of his career-best haul.

Hugh Greenwood (29 disposals), Jack Ziebell (29) and top draft pick Jason Horne-Francis (20) won plenty of the ball for the Kangaroos as they dominated the disposal count (386-303).

Contested possession (141-114) also heavily favoured the home side, with Greenwood and Horne-Francis strong over the ball in the midfield.

Willie Rioli kicked a career-high four goals for the Eagles but Jack Darling struggled on return after spending time away from the club during pre-season as he weighed up vaccination options.

Key forward Darling, who also had an ankle injury interrupt his preparation and sat out round one, managed just six disposals and missed a simple shot at goal in the final term.

West Coast started the match one man down on the bench when Declan Mountford was called up to replace Nelson at the last minute.

The former Kangaroos midfielder, plucked from WAFL club Claremont as a fill-in player, went through his warm-up in the change room as the match got underway.

Rioli kicked two first-quarter goals in a lively start as he and Tim Kelly (18 disposals) helped keep West Coast within touching distance at the first change.

Both sides lost players during a scrappy first half, with Davies-Uniacke hurt in a Rioli tackle and Thomas copping a leg to the ribs as he tried to smother a Luke Foley kick.

Midfielder Aaron Black, a Sandover Medal winner with West Perth in the WAFL, was the best of the Eagles' top-up players with 15 disposals and four clearances.

Black had seven touches in the final term and booted a goal that got West Coast within three kicks before Darling and Liam Ryan squandered shots that would have given their side a genuine chance.